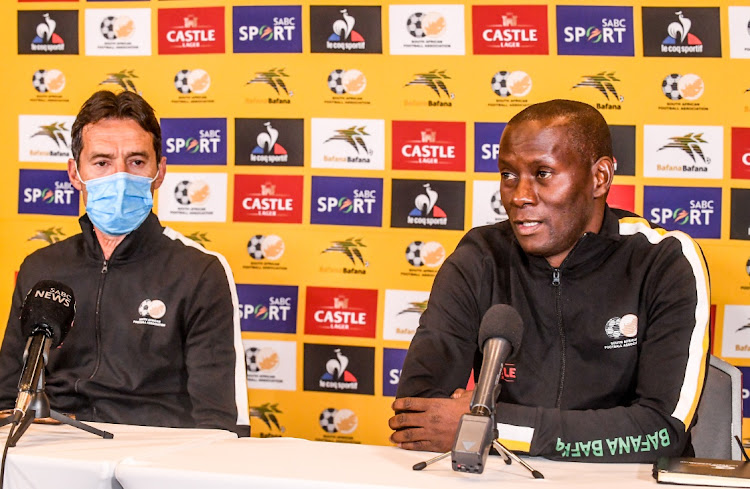 When Bafana Bafana legend Helman Mkhalele was part of the team as a player, the senior national team were on another level.

Mkhalele, who coached the national under-20 before his promotion to the senior national team, feels Bafana's recent decline is triggered by a lack of hunger to win.

“I have given the head coach an idea of how to address our issues. We have to find a better solution to address our situation. As a country, we should not be where we are, we deserve better.

"The biggest challenge that we are faced with is that the clubs must address many aspects at the club level. We have talented players, but they do not utilise their talents. Our players do not have the fighting spirit and it must be addressed at a club level first to make it easier for the national team," Mkhalele said.

Mkhalele and new Bafana assistant coach Cedomir Janevsk addressed the media ahead of the international friendly game against Uganda at the Orlando Stadium on Thursday (6pm).

Head coach Hugo Broos was absent as he was in his home country of Belgium to get the Covid-19 vaccine.

Macedonian Janevsk will serve as the first assistant coach, while Mkhalele is the SA representative in Broos' technical team.

"We are in contact with the coach daily and the fact that he is not here does not mean that he is not part of the preparations for the game against Uganda," said Janevsk.

Bafana will be without talisman Percy Tau and Teboho Mokoena, who tested positive for Covid-19.

Mokoena's teammate at SuperSport, Sipho Mbule, is also in isolation as he was in contact with him. Mosa Lebusa went for a scan, while his teammate Mothobi Mvala is also doubtful due to a knee injury. ​

The two coaches said they would access the rest of the squad before deciding on the replacement of the trio.

Like SA, the Cranes of Uganda have also failed to qualify for Afcon in Cameroon, next year.

Bafana Bafana were dealt a huge blow before their international friendly match against Uganda in Soweto on Thursday after the talismanic Percy Tau ...
Sport
1 year ago

Bafana Bafana coach Hugo Broos has announced a mostly local-based 19-man squad with a youthful and adventurous flavour to it‚ apparently also ...
Sport
1 year ago
Next Article