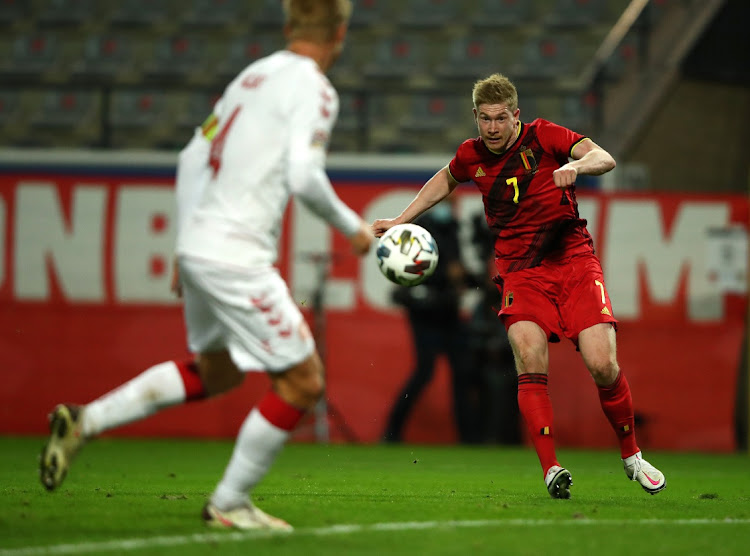 Kevin De Bruyne is with the rest of the Belgian squad before their first European Championship game against Russia.
Image: Dean Mouhtaropoulos

Brussels – Belgium are not counting on Kevin De Bruyne being ready to play in their first European Championship group game against Russia in St Petersburg on Saturday, coach Roberto Martinez said yesterday.

The midfielder joined the rest of the Belgian squad at their base in Tubize, but was sent straight for more medical tests, after a double facial fracture suffered in the Champions League final.

He had a small surgery on the injury last week but had always been planning to only join up with Belgium one week ahead of the Euro 2020 kickoff so he could have a break after a long club season.

“He will only join up with us in training when the medical staff say so. But I’m not really counting on Kevin to be ready for the first game,” Martinez told a news conference.

But the coach said he was delighted to see De Bruyne arrive.

“The highlight of the day,” said Martinez. “He looks ready. He watched our match against Croatia and is already in the mood.

“He will now build up slowly. But it makes a big difference that he is part of the group.”

While De Bruyne's participation was uncertain, captain Eden Hazard returned on Sunday in a 1-0 win over Croatia for his first international in about 18 months, coming on for the last eight minutes after an injury-plagued club season.

“It didn't matter how many minutes Eden played, but that he played. That's a big step mentally.

“I'm happy with how he came in. He picked up the pace of the game quickly. When will Eden be ready for 90 minutes? That's hard to say. The most important thing is that he is medically ready,” said Martinez. – Reuters

Manchester City defender Ruben Dias was named the Premier League Player of the Season on Saturday following a vote, becoming only the second ...
Sport
4 months ago

Alarm for England as Alexander-Arnold hobbles off

It's not a good sign, says Southgate
Sport
4 months ago

Ghana player tests positive for Covid-19 after arriving in Japan

A player on Ghana's Under-24 team has tested positive for the novel coronavirus after arriving in Japan for a friendly match, the Japan Football ...
Sport
4 months ago
Next Article