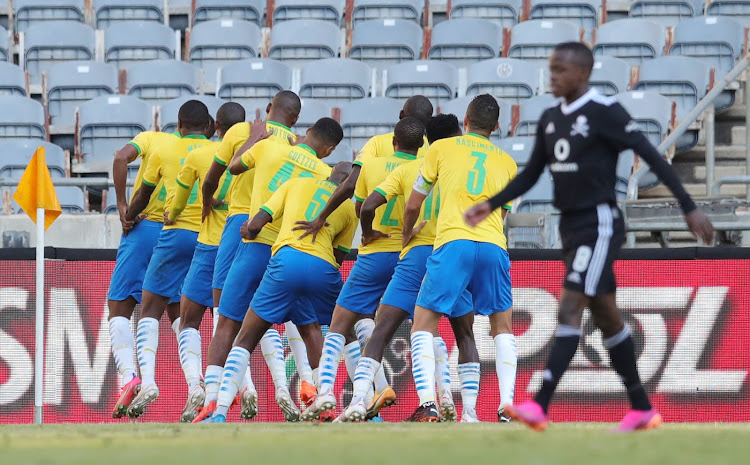 Mamelodi Sundowns are back at the top of the DStv Premiershi log table.
Image: Samuel Shivambu/BackpagePix

Mamelodi Sundowns will not let their guard down when they face unpredictable Maritzburg United and tactically versatile Ernst Middendorp in a DStv Premiership match at Loftus on Wednesday.

Sundowns will be bidding to increase their lead at the top of the table to four points and create some breathing room between themselves and second-placed AmaZulu‚ while Maritzburg need the points to move clear of the relegation zone.

The Brazilians will also be motivated after they convincingly beat Orlando Pirates 3-0 in their last league outing away from home on Sunday‚ while Maritzburg are on a three-match unbeaten run that includes two draws and one win.

“I think what‘s important when you profile Maritzburg is that you have to know the unpredictability of the team‚ particularly with the coach’s profile‚” said Sundowns coach Rulani Mokwena.

“Coach Ernst Middendorp is one coach who is extremely unpredictable and prepares for every opponent with astuteness and attention to detail. With whatever happens at the beginning of the match‚ there is a clear understanding that there could be structural changes‚ formational changes and even positional changes coming in the second half.

“That is the basis of our analysis.

"We have to prepare for a team that coach Middendorp has because he is one of the most tactically versatile coaches in the league‚ and that becomes the starting point of our analysis.

“The second and very important thing is that when you analyse them you go into the data because even with positional‚ structural or formational changes‚ there are still very key patterns that take place‚ and in particular with their schemes.

“There is a clear way of trying to press from the top and we saw it in their game against Swallows. We also saw it against Pirates with players like Bongokuhle Hlongwane‚ Ali Meza and Thabiso Kutumela‚ who plays as a second striker‚ to try and create a two-man attacking structure that is supported by the ball side wingers”

With only one win in their last four league matches‚ Mokwena admitted that they are not happy with the five points they picked in this cycle.

“The scenario for us is very clear‚ we don’t just work on our cycles but we work on five-game blocks. In this block we are extremely unhappy about the number of points we have picked up.

“We are going into the last game of the of this block knowing that we have to improve this cycle of games and pick up more points so that we are closer to the possibility of achieving the targets that we have set for ourselves.”