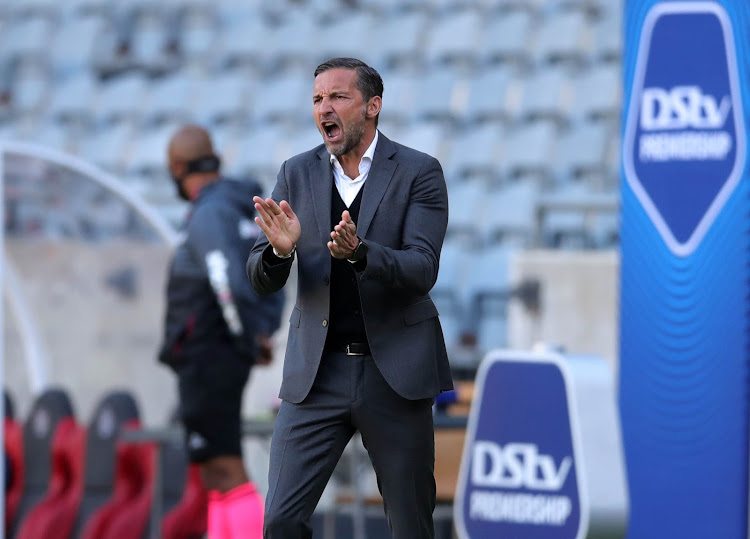 Orlando Pirates coach Josef Zinnbauer said their home defeat against Mamelodi Sundowns on Sunday‚ which further dented their chances of finishing in the top three‚ was not a true reflection of his team’s performance and defended his cautious approach.

Zinnbauer had strikers Tshegofatso Mabasa and Gabhadinho Mhango on the bench but chose to start the much anticipated DStv Premiership clash at Orlando Stadium with only two attack-minded players in Deon Hotto and Vincent Pule up front.

Hotto and Pule had midfielders Fortune Makaringe‚ Abel Mabaso‚ Ben Motshwari and Siphesihle Ndlovu behind them in a cautious formation.

Although Pirates had a fairly impressive first half‚ which ended goalless‚ the rampant leaders Sundowns scored three unanswered second half goals to regain their top spot and leave the Buccaneers static in fifth position.

“The results look very bad but the performance was not bad‚” said the German coach after the 3-0 home defeat to the leading champions.

“We know they have quality in the team and it is not easy. They are the number one team in the league and this is the quality that they have.”

Pirates lost the plot when they conceded a penalty shortly after the restart for the opening goal which Sundowns Brazilian captain Ricardo Nascimento converted‚ before Peter Shalulile and substitute Lyle Lakay put the result beyond doubt.

Zinnbauer questioned referee Luxolo Badi’s penalty decision and said luck was not on his team on the day.

“But it was unlucky for us. If we had a little bit more luck we could have scored first.

"We could not score because we did not get the luck that we needed and Sundowns scored from a penalty‚ which I think we can discuss whether it was a penalty or not.”

Zinnbauer admitted he is aware the Pirates supporters may have not have been happy with his decision to leave strikers Mabasa and Mhango on the bench and said it was because the two forwards are still fresh from recovering from injuries and he did not want to risk them.

“The reason was that‚ Mabasa had played four games in a row‚ and remember he was out for a very long time and not one time but two times.

“Mhango was injured the whole week. Last week he was injured and we were careful because we need him for the next games.”

Although Zinnbauer rang the changes and brought in strikers Mabasa and Mhango for Mabaso and Pule respectively‚ Pirates only managed six shots at goal‚ two of which were on target.

“If you speak about four chances or four shots‚ then let us speak about how many times we were in the box and we missed‚ and how many crosses we missed.”

Pirates‚ who remain stuck in fifth place on 39 points and trail leaders Sundowns by 11 points with six matches remaining‚ are in danger of missing out on qualifying for Caf competitons next season.

They trail red-hot second-placed AmaZulu by 10 points‚ are three points behind Lamontville Golden Arrows in third place‚ although the two KwaZulu-Natal clubs have played two matches more‚ with Swallows a point ahead of them in fourth spot.

They will look to redeem themselves when they host bottom club Black Leopards in Orlando on Wednesday at 5pm.