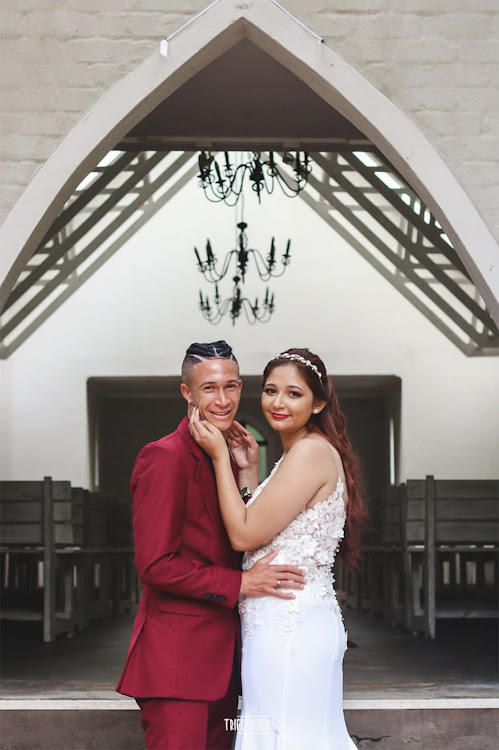 Damons has opened up about tying the knot barely a year after turning pro. Truth be told, it’s rare to see young people committing to marriages soon after getting their careers off the ground, but Damons is a special case, thanks to the guidance of 36-year-old Lentjies, who’s a married family man.

“I am very close to Kurt. He’s more like my mentor. He’s a disciplined guy who has his family. Having him around motivated me to get married soon after being given my first professional contract [he was promoted in August 2019]," Damons told Sowetan.

Damons, who hails from Gelvandale in Port Elizabeth, is married to his childhood sweetheart Tiffany Gabriella. Damons concedes his marriage has helped him to stay away from disruptive escapades. The young couple united in marriage last December and are yet to be blessed with kids.

“Settling down this early in my life has helped me to stay focused and stay grounded. It’s true that footballers love this lavish lifestyle, spending money on girls and booze, but when you’re married you are saved from those social ills," said the Chippa right-back.

With his mother Lynette practicing as a nurse at Dora Nginza Hospital and his father Llewellyn self-employed, Damons’ upbringing wasn’t really torrid. Even so, the Chippa full-back still grew a self-reliance sense from a tender age.

“My parents taught me to be self-reliant. After finishing my matric I had to work at a reception at St George’s Hospital [in PE]… to get transport fare to attend trials," noted Damons, the second child of his parents’ two children, alongside older sister Nawal, who’s 34 years old.

“I had to work half days so that I would attend trials and training sessions. I always wanted to play football. I made a lot of sacrifices for my dreams."

Damons also reflected on how he joined the Chilli Boys in 2014, having had to wait for his first team chance by spending five years in the club’s development structures, mostly in the reserve league.

“In grade 11, I attended Western Cape Sports School and I matriculated there in 2013. In 2014 I joined Castle League side FC Callies. At that time Chippa came down from Cape Town to PE and they had open trials at Zwide Stadium and that’s where I was selected. I was spotted by then coach Kosta Papic," Damons recalled.

The recent performance by Baroka has left coach Thoka Matsimela impressed and he wants them to show the same spirit as they look to cement their ...
Sport
3 months ago

Mokeke urges City to shore things up at the back