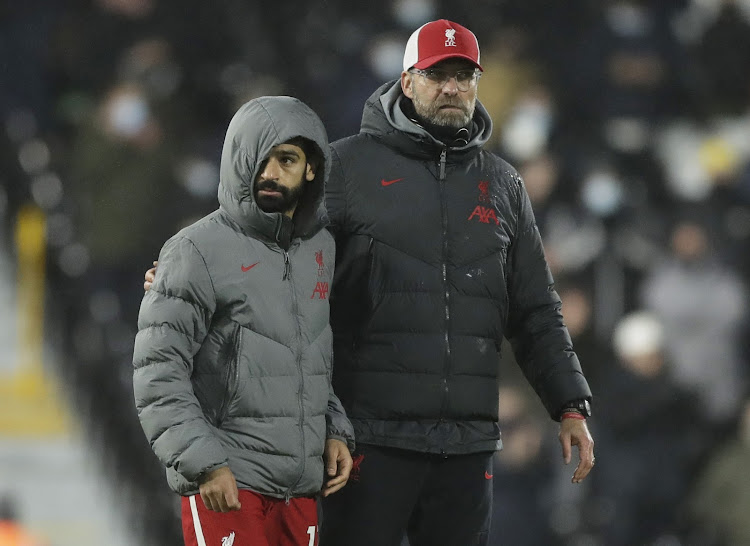 Liverpool had a chance to leapfrog Tottenham at the top of the Premier League but were saved by a late penalty from Mohamed Salah after going doing against Fulhm at a soggy Craven Cottage.
Image: REUTERS/Matt Dunham

Joint-leaders Tottenham Hotspur and Liverpool both dropped points on a busy day of Premier League action as Leicester City and Southampton narrowed the gap in what is shaping up to be one of the most open title races for years on Sunday.

Arsenal look extremely unlikely to be part of it, however, as they lost 1-0 at home to Burnley - a fourth successive home league defeat for the first time since 1959 leaving the Gunners languishing down in 15th spot.

After Chelsea's defeat by Everton on Saturday and a boring 0-0 draw in the Manchester derby, Tottenham had the chance to cement their place at the top of the table and looked set for a fifth away win of the season when Harry Kane put them ahead in the 23rd minute at Crystal Palace.

But Jeffrey Schlupp's late equaliser and some inspired goalkeeping by Palace's Vicente Guaita meant Tottenham had to be content with a 1-1 draw.

It gave Liverpool the chance at Fulham to leapfrog Spurs to the top of the table but they were way below their best as they were also held to a 1-1 draw by Scott Parker's side.

"I think in the first half an hour we could have lost the game, in the last 60 minutes we should have won it. In the end we get a point and that's it," manager Juergen Klopp said.

It left Tottenham and Liverpool both on 25 points from 12 games above Leicester on 24, Southampton on 23, Chelsea on 22, three clubs on 20 and Manchester City on 19, in ninth place with a game in hand over all the teams above them apart from Manchester United in eighth.

Six points separate the top nine, a stark contrast to last season when, after 12 games, Liverpool had 34 points and Bournemouth, in ninth spot, were 18 points behind.

Leicester appear to be mounting a serious challenge after a commanding 3-0 win at Brighton and Hove Albion on Sunday - James Maddison scoring twice and Jamie Vardy once.

Southampton eased to a 3-0 win over Sheffield United as they welcomed 2,000 fans back to St Mary's.

Only once have they managed more than 23 points from 12 games in the Premier League, in 2014 when they amassed 26.

Sheffield United are only the fourth side in English Football League history to have no more than one point from their opening 12 league games of a season, leaving manager Chris Wilder under mounting pressure.

"I have a shower every day, I wash my face, I look in the mirror and try to come in bright and positive.

"I try to do my work, always, to the best of my ability," Wilder, who was given backing by the club's Saudi owner, said.

Wilder is not the only manager in peril.

Arsenal's Mikel Arteta watched his side lose 1-0 at home to Burnley with some of the 2,000 fans present leaving early and some staying to boo after another dispiriting display.

Granit Xhaka was sent off in the second half and things went from bad to worse as Pierre-Emerick Aubameyang scored an own goal to condemn Arsenal to defeat.

Burnley's first win at Arsenal since 1974 lifted them above Fulham and out of the relegation zone, to 17th with nine points.