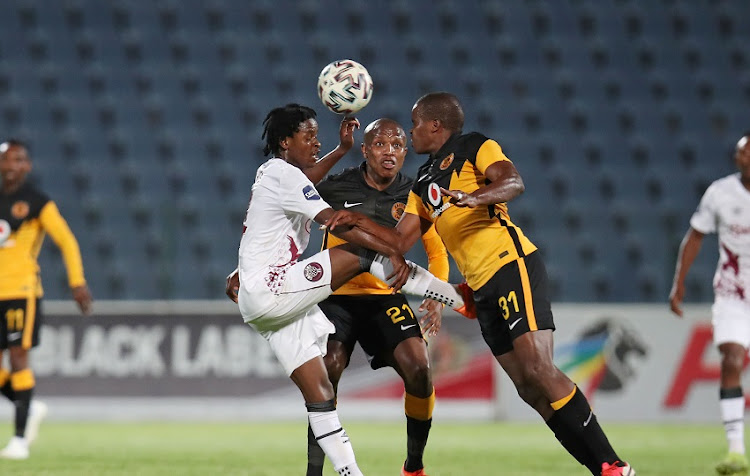 Given Moikhomotsi Thibedi of Swallows challenged by Lebogang Manyama and Willard Katsande of Kaizer Chiefs during the DStv Premiership match between Swallows and Kaizer Chiefs at Volkswagen Dobsonville Stadium on November 24, 2020 in Johannesburg, South Africa.
Image: Muzi Ntombela/Backpage Pix/Gallo Images

The Caf Champions League and Confederation Cup competitions are set to continue with the second preliminary round of fixtures in two week’s time where the four South African teams will be looking to progress to the next round.

SA are represented by former champions Mamelodi Sundowns and Kaizer Chiefs in the Champions League while Orlando Pirates and Bloemfontein Celtic are taking part in the Confederation Cup.

TimesLIVE takes a closer look at the sides that will be standing in the way of the SA teams in this early elimination stage.

The Brazilians‚ who had a bye in the first preliminary stage‚ will play against Jwaneng Galaxy of Botswana who advanced by defeating US Zilimadjou from the Indian Ocean Island of Comoros 5-1 on aggregate. Jwaneng Galaxy were crowned Botswana champions after their season was cancelled due to Covid-19.

Chiefs qualified for this stage of the competition after a narrow 1-0 aggregate win over unheralded Cameroonian champions PWD Bamenda while C.D. Primeiro de Agosto had a bye in the last round.

Pirates‚ who had a bye in the previous round‚ will be up against Angolan side Sagrada Esperança. Esperança had easy passage to 2nd round stage after their 1st round opponents Mbabane Swallows of Eswatini pulled out of the competition for financial reasons.

Bloemfontein Celtic booked a place in the 2nd round after they defeated Maniema Union 3-2 on penalties after they were tied 2-2 on aggregate to set up a meeting with Rivers United of Nigeria.

Rivers United progressed after they got the better of Futuro Kings from Equatorial Guinea 2-1 on penalties after they were tied 3-3 aggregate after 180 minutes of football.