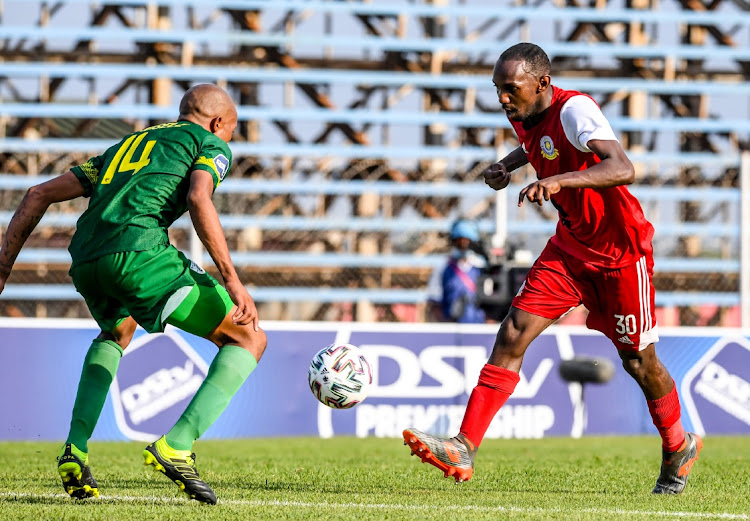 Thabo Rakhale of Tshakhuma and Goodman Mosele of Baroka during the DStv Premiership match between Tshakhuma FC and Baroka at Thohoyandou Stadium
Image: Sydney Seshibedi

Tshakhuma Tsha Madzivhandila's new signing Thabo Rakhale is grateful for the faith shown by coach Joel Masutha after he made his debut during their 1-0 victory over Baroka on Sunday.

The midfielder joined Tshakhuma only a week ago as a free agent after his contract with Chippa United ended in June.

He had been training on his own, and when he finally joined Tshakhuma, the 30-year-old never thought he could play so soon.

“It wasn’t frustration as such [being without a team], but sometimes it gets to you not playing for so long,” Rakhale told Sowetan.

“I have been itching to be on the field, and I’m just grateful to have a run. I didn’t think that I would play so soon. I just joined the club, and the following week I’m in the team that’s going to play.

“It was a great feeling to be part of the team. The coach told me that I would contribute to the team even though my level of fitness was a worry for me.

“But since I joined the team, I have been pushing myself, and maybe the coach felt that he could give me a few minutes in the game, and that’s what happened.”

After they tasted a first victory in their debut season in DStv Premiership, Tshakhuma Tsha Madzivhandila (TTM) are hungry for more.
Sport
1 year ago

Despite worrying about his fitness after missing the first opening matches of the DStv Premiership, Rakhale was pleased with his performance.

He even scored a goal, only to be disallowed, although television replays showed it should have stood. “It was a good game for me, and I’m grateful for the opportunity they gave me by signing me,” Rakhale said.

“I mean, playing the first game after so long is not easy, but I managed to give my best, and I am satisfied with how I played at the weekend. Coming here, there is only one thing in my mind... to play football. That’s the only thing I want – to play football and leave the rest to the man above.

“I do have my personal goals, but obviously, I can’t put them in public. I’m competing with myself. Let me put it that way.”

The skillful midfielder added that he would continue to work hard to regain his fitness. “We had a chat after the game with the coach, and he was happy with my contribution to the team. Now I have to take the positives out of Sunday’s game and move forward.

“I have to work on my fitness again because I’m not yet there where I can say I’m ready for any game. At the moment, I’m just concerned about my fitness and take it step-by-step.”

After his move to Kaizer Chiefs failed due to their Fifa ban, Thabo Rakhale is close to finding a new home in the PSL
Sport
1 year ago
Next Article