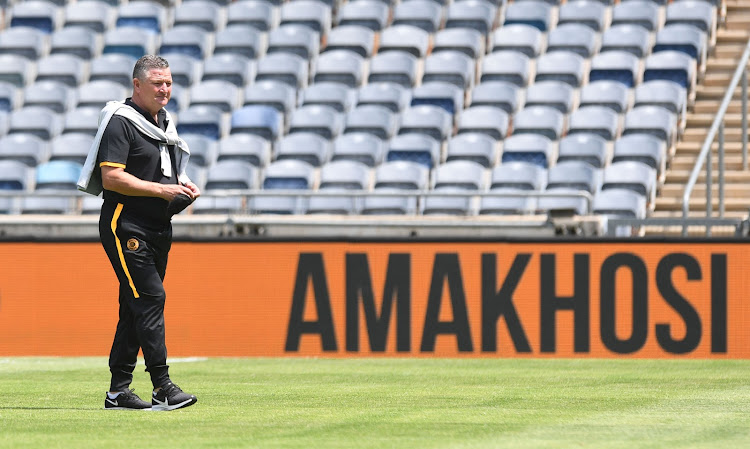 Gavin Hunt says he has to grind out results with the squad that is at his disposal.
Image: Sydney Mahlangu/BackpagePix

Kaizer Chiefs coach Gavin Hunt has admitted the 5-0 aggregate scoreline in his team’s MTN8 semifinal defeat against Orlando Pirates was “painful” and “embarrassing”.

The coach‚ though‚ again reinforced that he knows what is needed to turn Chiefs’ indifferent start to 2020-21 around.

Chiefs never enjoy losing against Pirates. To follow the 3-0 loss on October 31 in the first leg at Orlando Stadium with Sunday’s 2-0 defeat in the home second leg at FNB Stadium will have been hard to accept.

“It’s obviously very painful. It’s embarrassing‚ the score‚” Hunt admitted‚ stressing that Chiefs did have some unfortunate outcomes in front of goal that could have brought them closer over the two legs than the scoreline suggests.

“You know‚ I’m not saying we should have won the games – no. But we had good opportunities in both games.

“Maybe not so many [in the second leg]. But before Pirates scored the ball hit the crossbar – it could have gone in. It makes a difference. In the first leg‚ two chances in the first 20 minutes don’t go in.

“And Pirates are good on the turnover. They’ve got the pace. But‚ ja – it’s not good that we didn’t score‚ that’s for sure.”

Hunt was asked‚ as early murmurs of discontent grow among Chiefs’ fans already‚ what positives he can take from the two legs‚ to placate some of the grumbles and convince the club’s expectant supporters that he needs time to achieve what he wants.

“Well‚ I mean‚ I know [what’s needed]‚ but I cannot say publicly what I know‚” the coach responded.

“I mean I know a footballer‚ and I know players and I know teams. So if anybody can’t see that‚ then‚ you know‚ I don’t want to elaborate on that.

“But I … look‚ I know what needs to be done. But right now we’ve got to try and do the best that we can. And there’s not much more I can say about that.”

Pressed on the positives he could have taken away Hunt said: “Ja‚ that younger players got a run in these two games. Yes‚ sure.

“Obviously they didn’t feel it with the support‚ but felt what it’s like a bit at this level – what’s required at this level.

“And obviously knowing what I know [about what’s needed] without having to watch it.”

With this week’s Fifa date‚ Hunt has 12 days to work on Chiefs’ deficiencies ahead of their DStv Premiership fixture against Lamontville Golden Arrows at Sugar Ray Xulu Stadium on Saturday‚ November 21.