Pitso Mosimane on the title race: 'This thing still has a heartbeat and you will never know what’s going to happen' 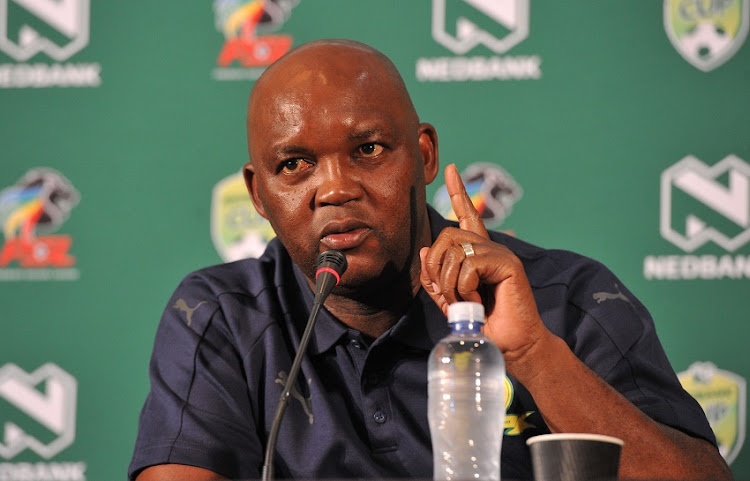 Football in the bio-bubble has been a massive challenge on the players and many coaches have struggled to field consistent lineups since the game resumed in August.

Most coaches warned about the risk of muscle injuries in the bubble as a result of the short turnaround of matches, with many players struggling to adapt to the little time they had between games.

Like most of his rivals, Mamelodi Sundowns coach Pitso Mosimane has had a difficult time juggling his personnel and this has disrupted momentum as his players tried to cope with the demands of a congested fixture list.

“We are losing players and everybody has been losing players with injures,” Mosimane said as Sundowns prepare for their penultimate match against bottom of the log Polokwane City at Loftus on Wednesday.

“You saw that Rivaldo (Coetzee) was not in against Baroka and we brought in AJ (Andile Jali), but he couldn’t finish the match. We have Mosa (Lebusa) with a big muscle problem, after he headed the ball you could see that he was struggling.

"But we have enough players to bring on board and replace them. We are all losing players due to muscle injuries and they are related the heavy load.”

Mosimane said Sundowns' programme has been more loaded than their rivals and they has greatly affected them in their last few games.

The title-chasing Brazilians suffered a potentially costly 1-0 defeat to Baroka FC a few days ago and thee Limopo side were fresher than his charges. “To be honest, when last did Baroka play?

"You could see that they were quicker and sharper in the first half than us because they haven’t played in the last six days or even more while we played two days back. They were fresher, we are not making excuses but it’s the truth that we are playing against well rested teams.”

The second-placed Sundowns resume the attempt to defend their league title on Wednesday and will be desperate to reel in leaders Kaizer Chiefs in the penultimate round of the season.

Mosimane said the unpredictability of these last few days of the race has made the campaign exciting.

"You saw that coach Ernst Middendorp did not even go to the post match interviews [after Chiefs' last-gasp defeat to BidVest Wits on Sunday]. We are human beings, expectations are high and behind us is everybody, including our families and supporters.

"We have to take the blame as much as we take the credit. This thing still has a heartbeat and you will never know what’s going to happen. We will try to win our remaining two matches.”