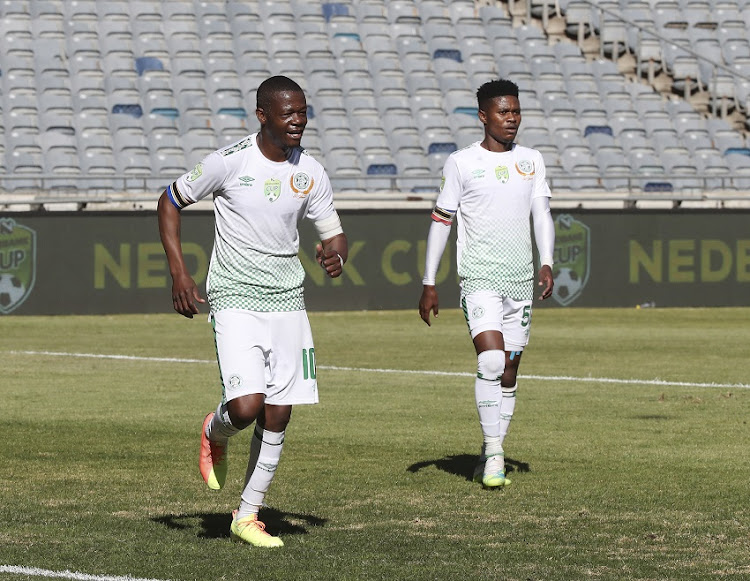 The goals at Orlando Stadium came from Ndumiso Mabena five minutes into first-half injury time‚ and Victor Letsoalo from and 83rd-minute penalty‚ and again in the 90th.

After a four-month break with no local professional football in sight due to the coronavirus pandemic‚ one would have hoped for the Premier Soccer League (PSL) to resume the 2019-20 season with aplomb‚ with a match featuring one or two of the top three giants of SA football.

But such was the way that the proceedings were suddenly halted on March 16 that the PSL had no option but to kickstart things with a double header of the Nedbank Cup semifinals on Saturday. Not a bad idea at all‚ if only all those teams were as good as the lofty spot they’d worked hard to occupy.

One hundred and forty six days ago Baroka FC‚ who have never been in the final of this competition‚ managed to beat their neighbours and 2011 runners-up Black Leopards 1-0 to book a semifinal date with Bloemfontein Celtic.

That became the Saturday’s opening match of the return to football at an eerily quiet‚ and on the dry and woeful pitch of‚ Orlando Stadium‚ where the people’s game started without its spiritual souls blowing the world-renowned vuvuzelas‚ or singing and dancing in the stands.

Focused as everyone interested was‚ it was still hard to make head or tail of what Baroka and Celtic’s players were doing on that awful pitch. The match was as empty of good play as the stadium itself.

Phunya Sele Sele‚ as the perpetually financially-strapped Celtic are known‚ had to overcome plucky low tier side TS Sporting 3-2 to earn their place in a semifinals of the competition they memorably won in the darkest days of apartheid in 1985. That was when the likes of Ernest Mtawali (Chirwali)‚ Eden Katango and Ambrose Mosala inspired the green and white shirted club to outfox the now defunct African Wanderers 2-1.

Ismael Mokitlane gifted Celtic their first major cup with his 117th-minute extra-time goal. But since then‚ the beloved club of the late Petrus Molemela has never been to the final of SA’s version of the FA Cup‚ one that is strangely not organised by the country’s football mother body Safa‚ as is the norm in most developed football leagues in the world. But that’s a story for another day.

The league had no way of choosing the top four as these were decided by the teams themselves‚ with the most successful in this competition‚ Kaizer Chiefs (13-time winners) and Orlando Pirates (eight-time winners)‚ letting down their guard‚ as they often say these days‚ at the second and first round respectively.

The second match‚ featuring one of those three PSL giants‚ Mamelodi Sundowns‚ five-time winners of this cup‚ against an equally strong 99-year-old Bidvest Wits‚ who we are unfortunately bidding farewell with their status having been sold to a bidder from Limpopo‚ was the one match that everyone was looking forward to.

A clash between Pitso Mosimane’s Sundowns and Gavin Hunt’s Wits is never dull. It’s always about who’s the best SA coach between these 50-somethings that many a soccer scribe are indebted to for their delicious quotable quotes between the games.

The two have collected a massive 16 domestic trophies between themselves‚ with eight each. Mosimane is only ahead of Hunt with two titles on the African continent. It is because of these achievements that everyone sits up and listens when these two open their mouths‚ even if talking finely-crafted admiration of each other’s work.

For the record‚ Ndumiso Mabena’s strike on the stroke of half time and Victor Letsoalo’s second stanza brace were enough to oust a 10-man Boroka as Celtic claimed their place in the final for the first time in 35 years. That final will be played on September 8 with Celtic facing either Sundowns or Wits‚ in a game that will bring down the curtain on what has been an unprecedented terrain on all fronts.

The PSL has pencilled October 9 as the date to start the now delayed 2020-21 campaign. But betting on that happening as planned may be as good as hoping to spot physical distancing in a taxi on our busy highways.