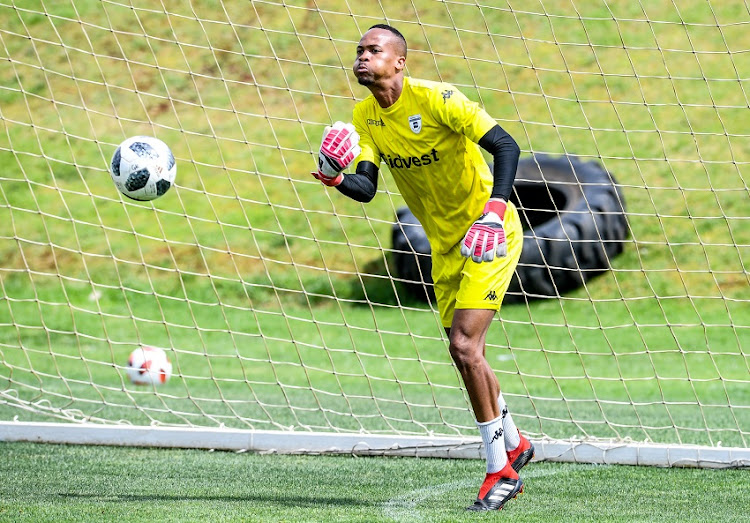 Brighton Mhlongo will get a rare run-out for Bidvest Wits as they return to professional football with their Nedbank Cup semifinal against Mamelodi Sundowns at Orlando Stadium on Saturday.

Wits coach Gavin Hunt told an online press conference on Thursday he has had similar injury problems to Sundowns counterpart Pitso Mosimane as a result of the uncertainty of the return date for football.

Hunt has one of his two first-choice goalkeepers this season‚ Ricardo Goss‚ still out for five games of an eight-match suspension he received with Sameehg Doutie for an assault on referee Masixole Bambiso in a 2-0 away defeat to Cape Town City in January. The other‚ Brandon Peterson‚ is injured.

Mhlongo (29)‚ the former Orlando Pirates keeper who has become something of a forgotten man with one appearance in two seasons at Wits‚ will get a chance between the posts in the Clever Boys’ games in the Gauteng biologically safe environment (BSE).

“Goss is out because he’s still got the five-game suspension. Brandon is out as well‚” Hunt said.

“Brighton has to play. We have also brought our Diski [reserve team] goalkeeper up‚ who I haven’t seen much of.”

Hunt‚ like Mosimane‚ faced challenges trying to rush players back from four-an-a-half months in lockdown for an initial proposed return to action date for the Premier Soccer League (PSL) of July 18.

While some PSL coaches have said‚ with a short training period and no friendlies‚ their first few games in the BSE will be effective warm-ups‚ Wits can have no such luxury.

They follow Saturday’s semifinal against Sundowns with Premiership games against Kaizer Chiefs at Orlando on Wednesday (August 12) and then Orlando Pirates at Ellis Park next Saturday (August 15).

“We tried to get the players ready by the 18th‚ which was a very short time we had when we came back‚” Hunt said.

“We had a similar thing [to Sundowns] – obviously players breaking down after a day or two‚ pushing them at training to put in a bit extra‚ and trying to do game preparation more than a preseason type of training.

“Thabang Monare and Gift Motupa are struggling a bit. Mxolisi Macuphu got hijacked this week‚ and his car stolen‚ so I don’t know [if he can play].

“Elias Pelembe hasn’t come back. The players who tested positive for Covid-19 have only had four days’ training. But we’ll have a team out.

“Are we ready for Saturday? I would think we’re a week or two from being ready.

“But will it be warm-up games? No – we have to just play straight away and try and see how long you can last. If you last 50‚ 60 minutes‚ obviously then your mental approach has to be good.”

Baroka FC and Bloemfontein Celtic play the early semifinal in Saturday’s double-header at Orlando at 2pm‚ with Sundowns meeting Wits at 7.15pm.