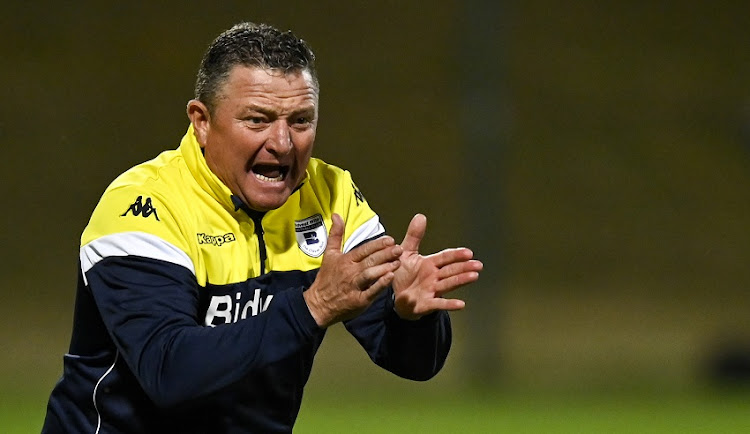 Bidvest Wits coach Gavin Hunt says it will be important for his players to finish off the 2019-20 season "treating the game with respect"‚ despite the distraction of the devastating news that the club has been sold.

The sale by Bidvest of the Premier Division franchise of Wits was confirmed by the new owner - Masala Mulaudzi‚ chairman of GladAfrica Championship Tshakhuma Tsha Madzivhandila (TTM) - on Saturday evening.

Hunt did not want to comment on this bombshell development directly.

Nor did he want to speak on Mulaudzi's open admission that he would not be able to afford the coach‚ so Hunt will be free to look for a job elsewhere.

"It's not my place to say anything right now. I think the chairman [Bidvest Wits chairman Alan Fainman] will make a statement in the next day or two‚" Hunt said.

Asked how difficult it will be for Wits' squad to complete the season‚ Hunt said: "Well‚ we've only seen the players on [online meeting application] Zoom and stuff like that. We haven't had a face to face.

"And I think once we get together we'll see and I'll get a feel for where we're going and what's going to happen.

The sale will come as a huge distraction to Wits' players and technical staff should the Premier Soccer League (PSL)‚ SA Football Association (Safa) and government come to an agreement for the 2019-20 Absa Premiership season to return to play amidst the coronavirus.

The combination of the sale of the club‚ plus numerous players being linked to other teams‚ and others having a potential move to Limpopo to mull over‚ on top of the already immense issue of the unprecedented suspension of football to return from‚ will be a lot for the squad to deal with.

Wits were in sixth place (38 points from 21 matches)‚ 10 points behind leaders Kaizer Chiefs (48 from 22)‚ but with a game in hand‚ when the PSL suspended matches on March 16.

The Clever Boys had only an outside chance still at the title‚ though one made a margin more interesting by the fact that two of their remaining nine fixtures were against Chiefs.

Hunt also did not want to talk about a clearly sad situation for one of the oldest clubs and most influential in the South Africa‚ which has enjoyed a proud history‚ and where the coach has played a leading role in turning into one of the most competitive in the league for five years.

Under the four-time league-winning coach‚ since he joined them in 2013‚ Wits have ended third‚ third‚ second‚ first‚ 13th and third in the Premiership in their past six seasons.