Komphela on Mosimane: ‘I hope he ignores the idiots who p–s on black success’ 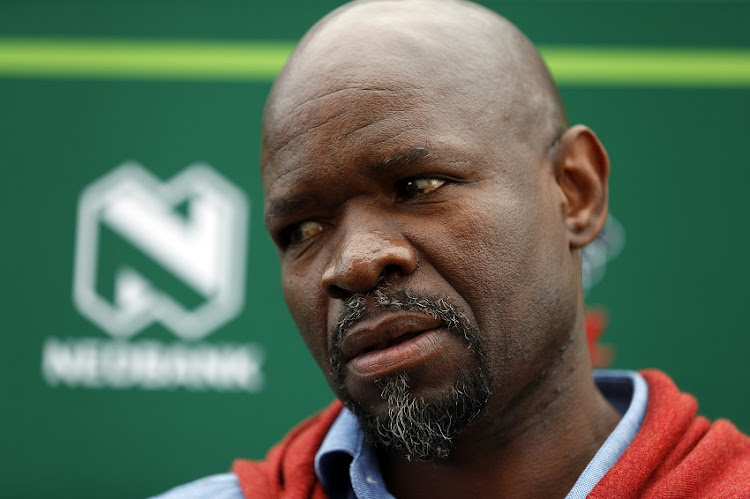 Golden Arrows coach Steve Komphela has given a rare insight into the inner workings of his professional and personal relationship with Mamelodi Sundowns counterpart Pitso Mosimane‚ whom he refers to as ‘my friend’.

Komphela and Mosimane‚ who have publicly declared mutual admiration for each other‚ are often pitted against each other because of the nature of their work in the highly competitive environment of the Premier Soccer League.

Tempers often boil over between opposing coaches on the touchline as a result of heated game situations but Komphela said there is a level of respect under any circumstances.

“It does get heated on the touchline and that’s normal during a match but there is a level of respect‚” Komphela about his former Bafana Bafana team-mate.

“You remember we played at the Sugar Xulu Stadium not so long ago where they lost to us in the league under rainy conditions before the Telkom Knockout match. It got heated but you must understand that Pitso is extremely passionate.

“We are all passionate but Pitso does not hide his passion. If things need to be said and addressed‚ he doesn’t think twice. He shoots and he will correct after shooting – he does not have warning shots‚ his warning shot is a direct shot.

“Certain things happen in a match and you can see him getting frustrated and when he is frustrated he explains to his technical team and talks to his players on the bench to question what is happening on the field.”

Komphela said Mosimane‚ who has done black and African coaches extremely proud with his achievements‚ always approaches him calmly and respectfully if he wants to talk about something during the match.

“If there is anger‚ he puts it across to his people but when there is frustration that can be controlled he communicates respectfully towards me. So there is mutual respect.

“I would be the last one to shout at him on the touchline because I have great respect for him. I can be insulted by a black person but I have a great weakness when I’m insulted by other races.

“I am not racist but I am just too sensitive and I tend to take things and put racial connotations to any voice that is directed towards me by those who are not of my own. I do tolerate even the worst abuse from my own because I understand and I know why.

“I have seen the worst abuse you can think of throughout my career and any abuse that came from my people I take it and understand and because indirectly when I throw it back at them it is still the same damage that I want to correct.”

Komphela also said Mosimane should ignore the noise from people who are trying to undermine his achievements.

“One must congratulate Pitso for doing justice to all through his work. He enjoys support and immense internal resource and ability.

“He has done black and African coaches extremely proud and we cannot ignore that. Knowing the nature of humanity‚ in any scenario where there is hope coming out of an African child‚ it is quickly extinguished so that it must not be seen.

“The Sundowns supporters and the president have given Pitso the support and nobody can erase his achievements. It will then become a point of reference that when tools of trade are presented to you‚ you will succeed but there is still that doubt which is normal in this crazy world that we will live in to consistently disrespect and doubt black people.

“Pitso must ignore that nonsense‚ I am not qualified to advise Pitso but I just hope that he ignores the idiots who try to p–s on black success.”