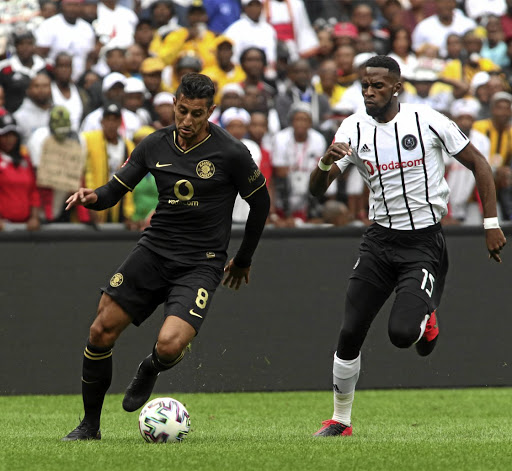 Leonardo Castro has extended his stay with Chiefs by two years. On the right is Fortune Makaringe of Pirates. / ANTONIO MUCHAVE

Now that his future at Kaizer Chiefs is finally secured, striker Leonardo Castro has set his sights on helping the club to win the Absa Premiership title.

Castro signed a two-year contract extension with Chiefs, ending fears he could leave this winter.

The 31-year-old will now only leave in June 2022 and him staying helps Chiefs' because they are currently unable to recruit new players until after January 2021 following a Fifa sanction.

Having won the league title with Sundowns in the 2015/16 season, the striker now wants to help Amakhosi to lift their first title in five years.

"I am very grateful to the chairman [Kaizer Motaung] and the Kaizer Chiefs family for the trust they have in me," Castro said.

Colombian striker Leonardo Castro has extended his contract with the Kaizer Chiefs for two years‚ the club have announced.
Sport
1 year ago

Miscommunication and a PR blunder have threatened to overshadow Kaizer Chiefs' latest 50th anniversary campaign before it even gets off the ground.
News
1 year ago

"I am excited to be part of the biggest team in South Africa. One thing I want is to win the league and the trophies for the history of the club. I also want to make my history here in South Africa and the Premier Soccer League [PSL].

"So, I am looking forward to adding my contribution to the team and I'm very excited about that. Thank you so much to everyone for the love and support and I would like to thank the supporters for showing me the love all the time, thanks a lot."

Chiefs have a chance to end their five-year wait as they lead the table. Before the PSL matches were forced to stop because of the Covid-19 pandemic in mid-March, they were leading second-place Sundowns by four points.

The Colombian striker joined Chiefs from Sundowns in 2018 after he won trophies with the Brazilians and is desperate to play a role when matches resume in helping the side reach the finish line.

Following his renewal, this means Chiefs also retain depth in the squad with their two transfer ban currently in effect. They have already renewed two of their key players in Willard Katsande and Bernard Parker.

They have lost George Maluleka who has signed a pre-contract with Sundowns. Kabelo Mahlasela, who joined Polokwane City on loan, may not return when his deal expires at the end of next month. The future of another veteran Ramahlwe Mphahlele is also up in the air.