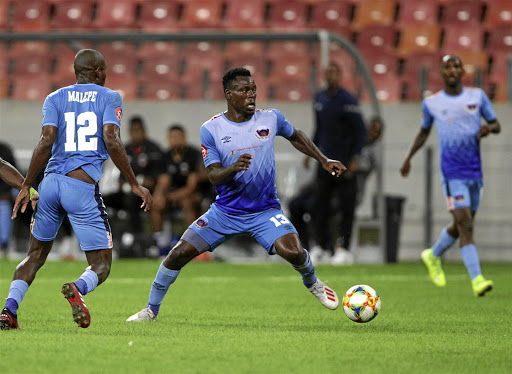 Meshack Maphangule of Chippa United, who is on loan from Orlando Pirates, has reunited with former mentor Rulani Mokwena. / Richard Huggard/ Gallo Images

Chippa United midfielder Meshack Maphangule says he had no reservations about reuniting with coach Rulani Mokwena after things didn't work out for both of them at Orlando Pirates.

Maphangule, who is on loan at United, worked with Mokwena when the latter assisted former head coach Milutin Sredojevic.

The 28-year-old got little game-time under Sredojevic-Mokwena regime but despite this, he has no hard feelings with Mokwena, now interim head coach at Chippa.

"Rulani is a good coach who is experienced and has a lot to contribute to South African football. We know each other very well and I know what he expects from a player," Maphangule told Sowetan.

My injury woes are over, he says.
Sport
1 year ago

"Everything was going well before the lockdown and the players were looking forward to implementing his tactics.

"When it was announced that he was the new coach, I didn't have a problem with it. We get along very well, so I was looking forward to working with him again."

The Chilli Boys only played one game under Mokwena, a goalless draw with Bidvest Wits, before games were suspended. The Port Elizabeth-based club are 12th on the Absa Premiership log with 26 points from 24 games.

"I think we can make it into the top eight. We are only five points outside of the top half and in the remaining games I think we can do it," Maphangule said. He expects to return to the Soweto giants at the end of the season when his loan deal expires. He will return to a different Bucs team under coach Josef Zinnbauer.

"All I know at the moment is that I will be returning to Pirates for the preseason. From there, we will see what happens." He said he was looking to work with Zinnbauer.