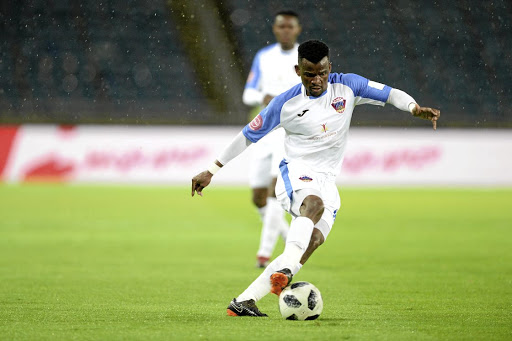 Tebogo Makobela of Chippa United is hopeful that the arrival of Rulani Mokwena as coach will help his career as well as he hopes to return to action after a long-term injury.
Image: Lefty Shivambu/Gallo Images

Chippa United defender Tebogo Makobela, who has been out of action due to injury, hopes coach Rulani Mokwena will give him some game time, if and when the Absa Premiership continues.

The 2018/2019 season ended on a satisfying note for Chippa when they survived relegation but unfortunately the same could not be said for the right-back.

The former Jomo Cosmos player suffered two fractures on both the tibia and fibula in May 2019 during Chippa's last league game of the season against Kaizer Chiefs.

The unfortunate injury put him out of action for eight months. Now that he is back on his feet and fully recovered, the player is counting on new coach Mokwena to play him in the remaining matches, if they happen once the coronavirus pandemic settles.

"I am fully recovered," Makobela said.

"I have been working hard to go back to the gym. I can tell you that I am 200% fit and I am hungry for the game.

"My chance will come, especially now with the new coach. I hope he will give me the opportunity to play in these six remaining games of the season."

Going back to the day of the incident that put him out for almost the entire season, Makobela said the first question he asked the doctor who treated him was whether he would be able to play football again.

"He said 'Yes, we'll put you back together. You'll play again and forget all about this'.

"My biggest worry was not being able to play again because I am the bread-winner at home. So, I had fears of losing my job because I knew my family is relying on me."

Limpopo-born Makobela said one needed to be mentally strong during the recovery process but does admit it was tough.

"I would get emotional every time I watched the team play. The fact that I could not play broke my heart.

"I never showed how much I was hurting to my teammates but I cried a lot when I was alone."