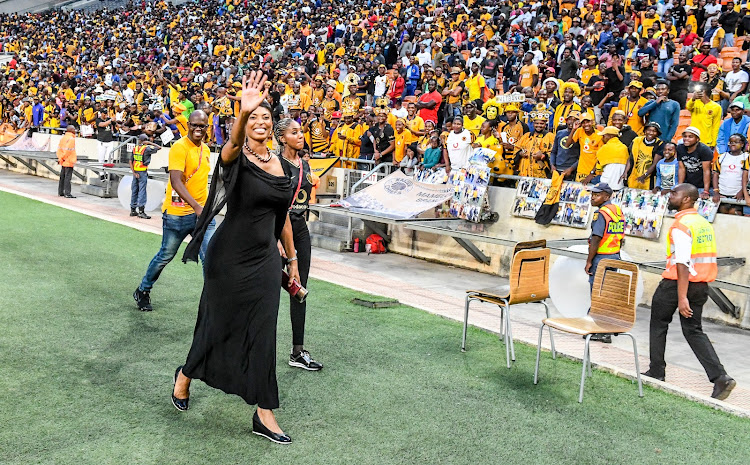 Kaizer Chiefs marketing boss Jessica Motaung waves to the supporters after a match against Highlands Park in Johannesburg. Behind her is younger sister Kemiso Motaung.
Image: Sydney Seshibedi/Gallo Images

Kaizer Chiefs director Jessica Motaung says they would be disappointed if the season is not completed due to the coronavirus outbreak and the Premiership leaders are denied the opportunity to fight for the league title.

The season was suspended with Amakhosi perched at the summit with 48 points from 22 matches‚ but there are still question marks over what could happen if the campaign is not completed.

Chiefs are followed closely by second-placed defending champions Mamelodi Sundowns with 44 points and a game in hand while SuperSport United and Orlando Pirates are sitting a distant third and fourth with 40 points each.

“If one doesn’t get the title based on the position we are in‚ it would be disappointing but I think being alive is the greatest gift we can all have‚” said Motaung.

“There is a lot of scenario planning to be done by the PSL Task Team that has been appointed and the EXCO‚ and they are going to look at all the scenarios.

"The permutations are a lot and until we have looked at those‚ I can’t even begin to think of what is going to happen.

"What is challenging our thinking and the way we define how things are going to be done is that our industry is not going to be the same after this.”

Motaung said even though they want to win their first league title since 2015‚ their focus at the moment is on joining the country in the fight against the pandemic.

“I don’t think disappointment for anybody is comfortable‚ at the end of the day we can’t be selfish but I am not even thinking about the league yet‚" she said.

"We are taking it one step at a time.

"There are many permutations for us to look at before we are selfish on whether we win the league of not.

“At the end of the day‚ we want to be safe and we want an industry that is going to be viable on the long term after this. We all want to win the league but not at all costs.

"We are at the top of the log and I am quietly optimistic‚ but I don’t think it is even about winning anymore.

"It is about the safety of everybody and making sure that our players remain fit and healthy.

“Right now‚ we don’t even know when the games are going to resume‚ we just want to make sure that the guys stay fit and we share with them the right nutritional and fitness things they need to do.

"We encourage them not to go to public gyms because we have a facility at the village.

"It is responsible to focus on where we are at the moment because the future looks so far.”