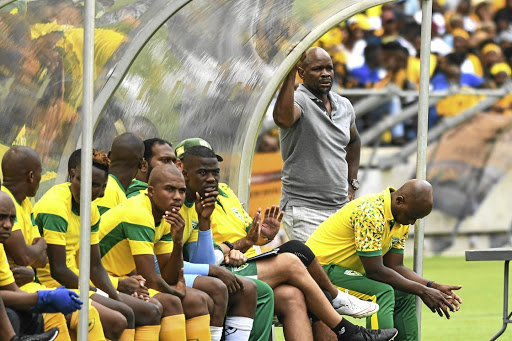 It's back to drawing board for disappointed Steve Komphela of Golden Arrows. /Darren Stewart/Gallo Images

Golden Arrows coach Steve Komphela was left disappointed that his team was unable to interrupt Kaizer Chiefs' sprint to the league title.

Abafana Bes'thende gave away a late goal to lose 0-1 to Amakhosi at Moses Mabhida Stadium.

Rival fans thought Arrows would do them a favour in the league race and at least throw off Chiefs. That did not happen as the Glamour Boys extended their lead to 10 points thanks to a Lebogang Manyama winning strike.

"It's disappointing to lose in the last minute after such good hard work. But when you get into this business, these are the kind of stuff you expect," Komphela said.

"Sometimes losing a match at that minute after putting such a good shift is disappointing but I can't fault the players. It's just a pity that we gave it away like that after doing everything right."

Arrows were able to contain the opposition attack for almost the entire 90 minutes.

"Matches of this nature build character. This is where you think to yourself that you can withstand them for 90 minutes and then when you are playing a team similar to yourself you can go for the kill. We were not able to go for the throat and that's what we lacked."

Chiefs, Komphela's former team, are cruising toward their first title in five seasons. In his three seasons at Amakhosi, Komphela was unable to turn the team into champions.

The coach from Kroonstad, Free State, was reluctant to talk up Chiefs' title chances. "They are doing very well.but I don't want to uncover it because next thing you see a poster that says 'this or that about Chiefs winning the title' so I'd rather leave it alone."

This was truly an ugly advert of the beautiful game‚ an error ridden affair that would have been shamed by a spectacle of pot-bellied souls in a ...
Sport
1 year ago
Next Article