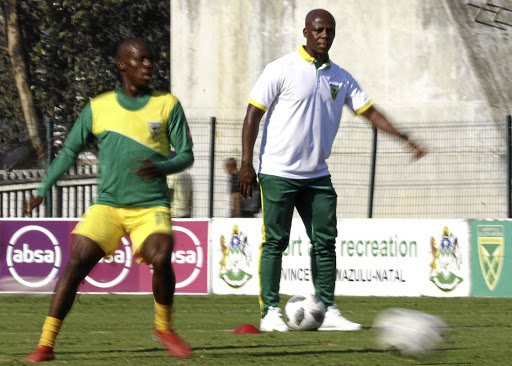 Mandla Ncikazi of Golden Arrows will take on ex-boss Manqoba Mngqithi when they face Sundowns on Saturday. The duo worked together at Arrows before Mngqithi joined Downs.
Image: Gallo Images

Ncikazi was Mngqithi's second in command when Arrows clinched their first and only top-flight trophy, the MTN8, in 2009. The former colleagues will be at opposite ends when Abafana Bes'thende host the Brazilians in the Telkom Knockout semifinals at Sugar Ray Xulu Stadium on Saturday (3pm).

"It would be nice to win against Manqoba, sitting on the opposite bench. It was 2009, so it's 10 years now [since Arrows reached a cup final]. That should be a good omen for the team, that it happened at that time I was here and I am here again," said Ncikazi.

The 50-year-old Arrows deputy coach feels the crop of players the Durban club boasts at the moment is the same as the triumphant class of 2009.

Ncikazi, who also served as the main coach at Maritzburg United, overseeing just five games in 2015, opened up about his relationship with Komphela, having also assisted him at the Team of Choice before taking the reins himself after the ex-Kaizer Chiefs coach was fired four years ago.

"We are friends because of work, we are not friends because we're just friends. It's a good environment where you work with an honest person, a person who gives you room to be yourself," he said.

"It's good to work with someone who sees you as a coach rather than a ball-boy or an assistant. We became friends because I like what he does and he likes what I do."

Arrows have already proved capable of upsetting a side of Sundowns' stature, having claimed a 3-2 league win in the same fixture a fortnight ago.