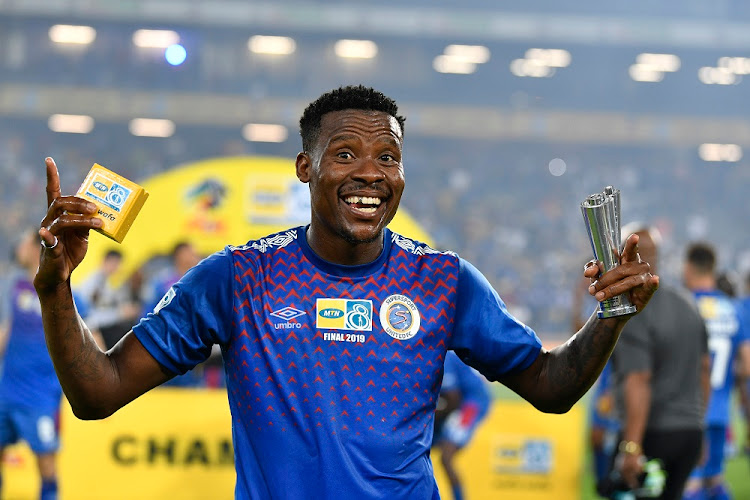 SuperSport United have confirmed that striker Thamsanqa Gabuza has returned to training after being given time off to mourn his son.

The former Orlando Pirates striker surprised SuperSport management and teammates when he told them in the midst of wild celebrations shortly after winning the MTN8 trophy that his son had died days before the final.

Gabuza’s son was buried a few days before United beat Highlands Park 1-0 in a match that also saw the gangly former Bafana Bafana striker walk away with the man-of-the-match award.

Gabuza had decided not to tell anyone about the tragedy before the match, saying he didn’t want to distract the team ahead of the final.

SuperSport CEO Stan Matthews confirmed that Gabuza was given time to visit his family and mourn his son properly last week.

Teammates hail Gabuza for bravery in the midst of personal tragedy

SuperSport United skipper Dean Furman and striker Bradley Grobler were as stunned as everyone when their team mate Thamsanqa Gabuza told them about ...
Sport
2 years ago

“We gave him a week off to just go and attend to his family in order to heal and grieve,” he said.

“He’s happy at the club and has settled so well. The fact that he could produce a man-of-the-match performance under such personal circumstances says a lot about his character.”

Matthews said he was taken aback when Gabuza broke the news to the team a few minutes after their triumph in the MTN8 at the Orlando Stadium almost two weeks ago.

“Personally, I didn’t know anything. I went into the dressing room afterwards to celebrate with the boys. We normally go and have a song or a prayer or something after the game. I went in with all the boys to go and say a prayer," said Matthews.

“When we got into the dressing room, we gathered around and Gabuza went into the middle. So I just thought he wanted to lead the prayer and share his thoughts after they'd helped him to win the man-of-the-match award, which I thought was great.

“Suddenly he opened his heart and told us what had happened with his son. You could have heard the pin drop in the dressing room. There was absolute shock and we all just got around him and gave him a hug - just to express our amazement, really.

“The fact he had extended himself in this way and in that fashion for the good of the team, I think that’s unbelievable and kudos to him. He’s a bigger man than me. He showed his desire and commitment to make the best of this stint that he has with us. Long may it continue and we wish him all the best in the future.”

Gabuza finished as the competition's top scorer with three goals. He will now be expected to continue helping the club win more silverware this season.

SuperSport entertain Baroka FC in the first round of the Telkom Knockout at the Lucas Moripe Stadium in Pretoria on Saturday.

Baroka are the defending champions of the cup, after defeating Orlando Pirates in the final last year.

SuperSport last won the trophy in 2014, when they defeated Platinum Stars 3-2.

Sihle Ndebele reflects on how SuperSport got the better of the Lions of the North in Saturday's MTN8 final. Experience While it was Highlands' ...
Sport
2 years ago

Kaitano Tembo not only dedicated winning the MTN8 trophy to his grief-stricken striker Thamsanqa Gabuza‚ but to all the coaches he’s worked with and ...
Sport
2 years ago
Next Article