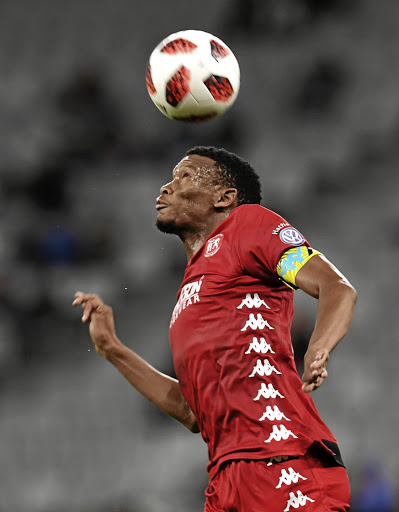 Mothobi Mvala feels that Highlands Park are not under as much pressure as many would believe in the final of the MTN8 against SuperSport United at Orlando Stadium on Saturday (6pm).

The midfield hardman says they are instead well aware of the expectations that come with playing in front of what could be their biggest crowd.

"Pressure was on us to win the second leg semifinal against Polokwane City [which they won 5-4 on penalties].

"After that we knew that we were in the final, so there is no pressure - not from our bosses [directors] and even from our coach [Owen da Gama]. But we as players want it so bad," he said.

"This is a dream come true for each and every one of us in the team. Remember, a lot of us are playing for the first time in this cup competition and that alone motivated us to go in there and be in the final. Not much is expected from us, since we are underdogs."

Prolific striker Peter Shalulile, who sits on top of the Absa Premiership chart as top goal scorer with six strikes, said: "It's an honour to be involved in the final of one of the biggest cup tournaments. Glory to God. SuperSport is a big team, but we are looking forward to seeing what happens on the day."

The final on Saturday will be the 11th edition after the mobile telecommunication company took over from SAA in 2008.

Matsatsantsa a Pitori are the only team to appear in every season of this cup competition. United are yet to finish outside of the top eight bracket.

SuperSport United skipper Dean Furman admits that it will be difficult to break down the defensively astute Highlands Park, who are yet to concede in ...
Sport
2 years ago