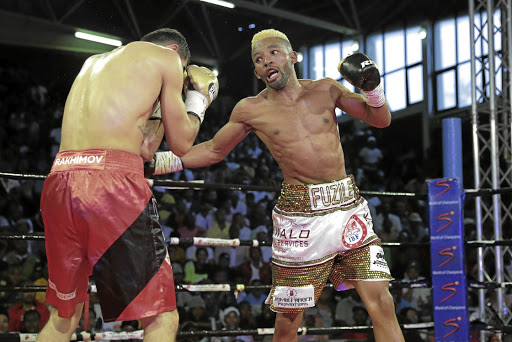 Chief executive of Rumble Africa Promotion Nomfesane Nyathela has confirmed that her boss promoter Thembalethu Ntuthu, BSA CEO Tsholofelo Lejaka and trainer Colin Nathan have written a letter of complaint to the IBF regarding what is clearly a violation of the Boxing SA Act by corner man of Shavkhatdzhon Rakhimov before his eight-round stoppage win over Azinga Fuzile.

In an extensive video replay of the fight - the IBF junior lightweight elimination bout at Orient Theatre on Sunday - Fuzile's team exposed a critical sequence in between rounds seven and eight.

Rakhimov was on his corner receiving instructions from head trainer. During such sequence, assistant trainer is seen administering what appears to be smelling salts or a similar product underneath Rakhimov's nostrils. The boxer's facial expressions indicate a strong reaction as he turns away his head before regaining his bearings.

Smelling salts have been banned from boxing since the 1970s.

Specifically to this event, the practice is prohibited in accordance with Rule 7 as stated in the BSA handbook: "No stimulant (including, but not limited to smelling salts or ammonia) may be given to a boxer other than water sprinkled on the body or used as a mouth wash or drink."

Rakhimov came out strong to begin round eight and he stopped Fuzile to earn the rights to challenge for the IBF title that is held by Tevin Farmer.

IBF president Darryl Peoples from the US was fight supervisor on Sunday.

"Yes, we have already written to both Darryl and Boxing South Africa," confirmed Nyathela.

Lejaka, who was ring-side guest on Sunday, in part wrote: "If this is indeed smelling salt, then surely Rakhimov placed himself in a position of unfair advantage over another competitor through use of a stimulant."

He said Boxing SA's request is for the IBF to take action against Rakhimov and his team for conduct unbecoming and in the South African context, a violation of South African Boxing Regulations 32 (6) and 32 (7).

"Quite specifically and emphatically, we request the IBF to view this as an unethical conduct carried out with intention to cheat and act on it as such!

"We hope that the IBF will view this matter in serious light," he wrote.