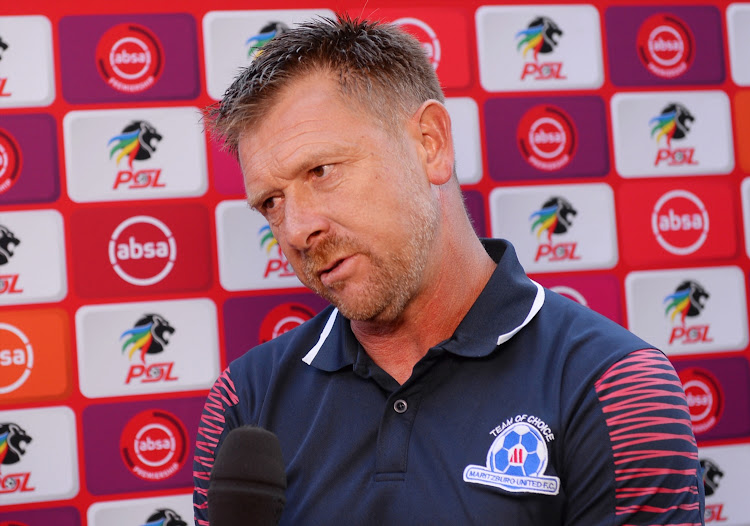 Eric Tinkler sees no reason why his battling Maritzburg United cannot travel to Atteridgeville for Saturday’s Absa Premiership matchup against Mamelodi Sundowns on Saturday and come away with a victory.

Maritzburg – who only survived in the PSL via the playoffs last season – have begun without a win (two draws and two defeats) in four matches to wallow in 14th place ahead of their meeting with Sundowns at Lucas Moripe Stadium (kickoff 6pm).

It should be a clear mismatch‚ on paper at least‚ against the back-to-back defending champions.

But Tinkler knows the PSL well enough to know that on a given day any team can beat another.

Having tweaked what he can and injury-free from a three-and-a-half-week break for a Fifa international date and the MTN8 semifinals‚ the former Bafana Bafana midfield hard man is hoping for a pressure-relieving first win this weekend.

“There was the disappointment of a loss against Black Leopards‚” Tinkler said of his side’s 1-0 defeat at Harry Gwala Stadium on August 28‚ in their last fixture before the break.

“The team performed very well on the evening. And again our biggest problem was we haven’t been scoring.

“And we missed a penalty. We could have at least taken a point‚ but we ended up with zero points. That was a massive disappointment to everyone.

“Psychologically I do think it affected the players. And what’s been important over these past three weeks has been to try and re-motivate the players and try to get them back into a winning mentality.

“We played a quite a few friendly games to try and rebuild that confidence‚ and I think the players have responded positively.

“The fact that you’re playing a massive game now against Mamelodi Sundowns‚ what you do know is that the players will be motivated.

“It’s going to be a tough task. But‚ you also know there are no guarantees in this league. Any team can beat any team. And if we can put on a good performance on the day‚ we can go there and collect maximum points.

“Nothing stops us from achieving that‚ in my opinion. And that’s what we hope to achieve. Because obviously a win is very important for us right no moving forward.

“Everybody’s holding up their hands. A few players have come back from niggling injuries – Miguel Timm‚ Thami Sangweni‚ Gabriel Nyoni.

“Everybody’s here and we can prepare ourselves in the correct manner.”

Sundowns turn their attention back to the league having been eliminated from the MTN8 in the semifinals with Wednesday night’s 2-0 second-leg (3-1 aggregate) defeat against SuperSport United at Lucas Moripe.