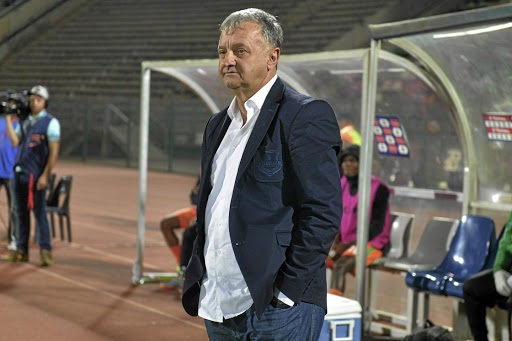 Isn't it time SA football clubs ask themselves serious questions about the foreign coaches coming through to the Premier Soccer League? There are too many who just don't seem to add much value to our football and hop from club to another.

There have been some good ones that have helped take the PSL to another level over the years.

We've seen some decent foreign coaches at Kaizer Chiefs, for example, in the likes of Eddie Lewis, Mario Tuani, Jeff Butler , Ted Dumitru and Stuart Baxter. But at the same time, there have been some horrible misses in the likes of Phillipe Troussier, Wladimir Vermezovic, and more recently, Giovanni Solinas.

Across all clubs, there have been some good foreign coaches, but many who were certainly not better than what SA has to offer.

Almost every local coach's name has been thrown in the hat to succeed Stuart Baxter as the national team coach.
Opinion
2 years ago

Ernst Middendorp has been to many SA clubs and has not achieved much since his first stint with Chiefs in 2005 that produced the Absa Cup and SAA Supa 8.

Whether good enough or not, these coaches know very well that when they are fired, all they have to do is stick around and wait for the next opening, which doesn't take much long. This week alone, three coaches lost their jobs.

It's a pity that SA clubs just settle for whoever is available to fill a vacancy and before long, they would be parting ways, notwithstanding that there are of course some decent coaches that stay on a bit longer.

There’s a sound warning and it comes from Bafana Bafana coach Stuart Baxter ahead of the 2019 Africa Cup of Nations qualifier against Seychelles here ...
Sport
3 years ago

Perhaps, what Polokwane City owner Johnny Mogaladi told Sowetan recently is a key factor in the recruitment process to ensure that the clubs end up with quality coaches, rather than settling for somebody, because they are from abroad.

Mogaladi mentioned that he doesn't only rely on a CV when hunting for a coach. He takes his time to travel to wherever his target is coaching to see how he goes about his business before making a decision.

City's latest recruit Zlatko Kromptic was coaching in Rwanda when Mogaladi went over there and was impressed.

Other clubs need to do the same when looking for coaches. Otherwise we will end up with coaches who are referred to as plumbers by local football fans, because they don't believe they were coaches in their own countries to begin with.

WORLD CUP DIARY: Cisse blazing a trail in Russia as the only black coach at the showpiece

Tuesday sees the start of the second round of group games at the World Cup as hosts Russia take on Egypt‚ with matches continuing to come thick and ...
Sport
3 years ago

They say patience is a virtue and this will ring true to Mamelodi Sundowns boss Patrice Motsepe who's no longer trigger happy when it comes to the ...
Sport
3 years ago

Mamelodi Sundowns coach Pitso Mosimane has said that new Spanish director of academy and scouting José Ramón Alexanko will have to prove himself as a ...
Sport
2 years ago
Next Article