'Changing coaches not good for SA' 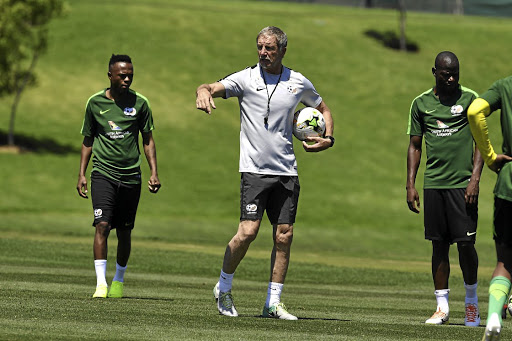 Baxter parted ways with the national team after two years in charge.

Kekana was recently part of Baxter's squad that reached the quarterfinals of the Africa Cup of Nations in Egypt.

The industrious midfielder said he was shocked to learn that the Brit had vacated his position.

"It was unfortunate to lose the coach at this time where we thought we would continue and build something," Kekana said.

"We are a nation that deserves better, to be honest. Whoever takes over the hot seat should try to bring something new and different."

Pitso Mosimane is confident of securing an overseas transfer for Rivaldo Coetzee but the Mamelodi Sundowns coach says the move has a greater chance ...
Sport
2 years ago

Since 2010, the national team has had five coaching changes with Carlos Alberto Parreira, Pitso Mosimane, Gordon Igesund, Shakes Mashaba and Baxter having come and gone.

The 34-year-old says the coaching instability does not bode well for SA.

"It has been a crazy career for me, because I once had many coaches in one season at Black Leopards.

"So I know what it is like and it's not a good thing to change coaches all the time."

A number of local coaches have been linked with the Bafana job, including Kekana's mentor at Downs - Mosimane.

The veteran from Zebediela adds that whoever gets the job must be given the right support.

"So we need to give the job to someone who will have what it takes. People will always have their own opinion in football, but from my side I think the players will support whoever is appointed as the new coach."

Star gets 2 weeks off after five years.
Sport
2 years ago

Former Bafana Bafana midfielder Teboho Moloi says Stuart Baxter should have had the core of Mamelodi Sundowns’ players as a Plan B at the Africa Cup ...
Sport
2 years ago
Next Article