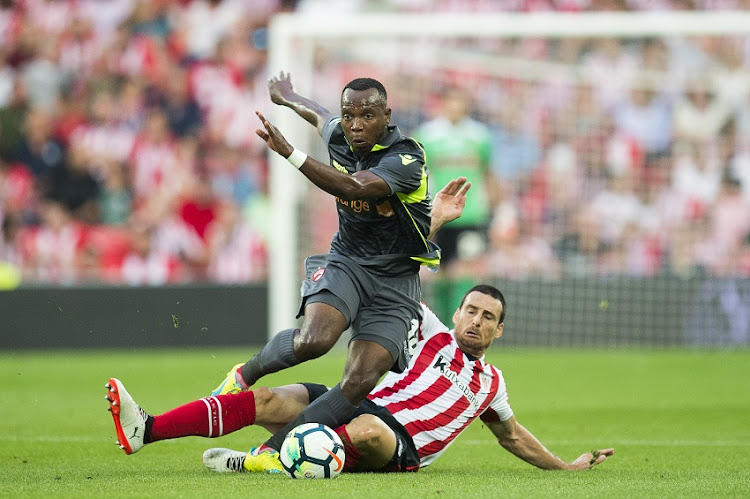 Aritz Aduriz of Athletic Club duels for the ball with May Mahlangu of Dinamo Bucarest during the UEFA Europa League Third Qualifying Round: Second Leg match between Athletic Club and Dinamo Bucarest at the Estadio de San Mames on August 3, 2017 in Bilbao, Spain.
Image: Juan Manuel Serrano Arce/Getty Images

Bafana Bafana’s forgotten man May Mahlangu will feature in the UEFA Europa League on Thursday‚ one of just a handful of South African players in European club competition this season.

Mahlangu is now with Kazakhstan side Ordabasy‚ where he is playing on loan from Ludogorets Razgrad in Bulgaria.

Ordabasy are at home to Georgian side Torpedo Kutaisi in the first qualifying round and will hope to take a sizeable advantage to the away leg in a week’s time.

The Georgians made the play-off round last season before losing to‚ ironically‚ Ludogorets Razgrad.

Ordabasy have only once before made it past this stage‚ when they reached the second round in the 2012/13 season‚ but lost to Norwegians Rosenborg.

Mahlangu‚ 30‚ has been a regular for the side in 2019 as he continues his journey through eastern Europe and Asia‚ having also played in recent seasons for Turkish side Konyaspor and Romanian outfit Dinamo Bucharest.

He will be joined later in the competition by Luther Singh and Lebo Mothiba‚ when their respective clubs enter the fray.

Singh’s Portuguese side Sporting Braga start in the third qualifying round‚ while Mothiba’s French club Strasbourg enter in the second stage.

They are awaiting the winner of the tie between Israeli side Maccabi Haifa and Slovenian outfit Mura‚ which will provide a potential banana-skin for the French Ligue 1 outfit.

The latter‚ who were only founded in 2012‚ are playing their first European season.

It appears that South Africa will have no direct interest in the UEFA Champions League this season‚ with a number of youth players at participating clubs‚ but they are highly unlikely to get a run.

Tashreeq Matthews is back at German Bundesliga side Borussia Dortmund after his loan with Utrecht‚ while the duo of Dean Solomons and Leo Thethani are at Ajax Amsterdam.

Then there is 16-year-old midfielder András Németh‚ a rising star of Hungarian football but a player born in Cape Town‚ and so eligible for the national team. He is currently with Belgian champions Genk.