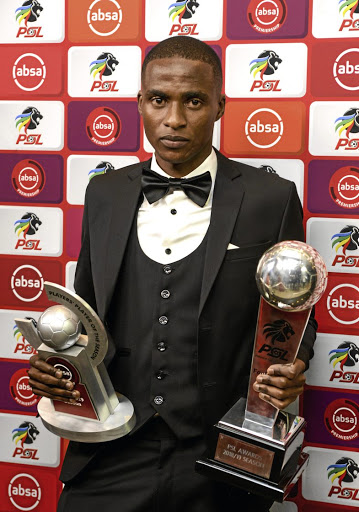 Thembinkosi Lorch of Orlando Pirates with his two trophies from the PSL awards. /Gerhard Duraan/ BackpagePix

After losing out on the league with Orlando Pirates, winger Thembinkosi Lorch is smiling again.

During his short speech accepting the accolades at Durban's International Convention Centre, the excitement did little to get words out of him.

Briefly, he thanked everyone associated with the Buccaneers and even when it eventually sinks in that he collected a cool R400,000 in prize money on the night, it's highly unlikely he would make any big statement.

But he spoke enough to understand that he took his game to another level this season, by doing more training sessions, especially with Bucs' finishing coach Stephane Adam.

He contributed 13 goals and five assists in domestic competitions and has attributed the decent numbers to extra training. "We have a finishing coach at Orlando Pirates and we always do it [at training].

"When you want to be the best player, you have to score for the team and create for others to score. You have to fight for the team, even if it's difficult," he said.

Orlando Pirates star Thembinkosi Lorch is crossing his fingers that the two major awards he won at the PSL's end of the season ceremony in Durban at ...
Sport
2 years ago

The awards, including teammate Vincent Pule's nod for Goal of the Season, will go a long way in being some consolation for Pirates, who also lost the Telkom Knockout final to Baroka.

Lorch, however, admitted that winning silverware with the club will be much better.

"Maybe next season we will make our supporters and chairman [Irvin Khoza] happy."

Meanwhile, the one man who will be watching Lorch next season with keen interest is Mamelodi Sundowns coach, Pitso Mosimane.

The former Bafana Bafana mentor said Lorch should prove his qualities by not being a one-season wonder.

"I think Lorch deserves [the awards]. he ran all the time and scored goals.

"I'm happy [Downs midfielder] Hlompho [Kekana] won something before he retires, because he's been consistent for six years and that's what I want to see from Lorch."

Orlando Pirates fans had something to celebrate after Thembinkosi Lorch walked away with the PSL Footballer of the Season and Absa Premiership ...
Sport
2 years ago

Mamelodi Sundowns coach Pitso Mosimane was happy to see club veteran Hlompho Kekana finally win something at the weekend after watching the ...
Sport
2 years ago
Next Article