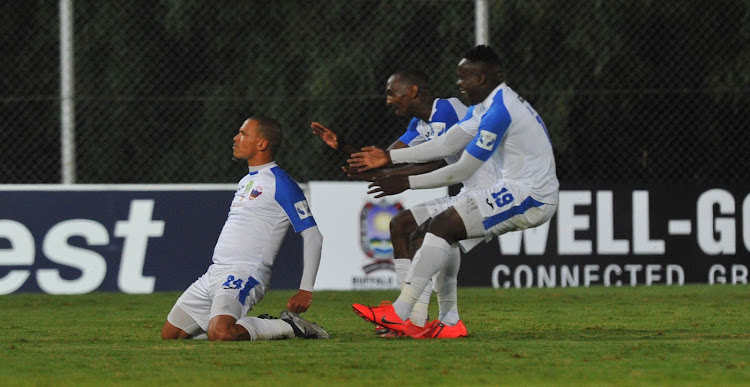 After a goalfest that ended at 4-4 in 120 thrilling minutes, Chippa United edged Bidvest Wits 5-3 on penalties in Saturday night's Nedbank Cup quarterfinal at Bidvest Stadium.

Two boxers slugging toe to toe would not go down to the canvas as eight goals were scored - six in normal time and two more in extra time - to take the game to the shootout.

Striker Andile Mbenyane put Chippa ahead in the third minute. Gift Motupa in the 20th and Terrence Dzvukamanja two minutes into first-half injury time made it 2-1 to Wits by the break.

Boikanyo Komane equalised from the penalty spot in the 63rd for Chippa after Sifiso Hlanti's handball. Dzvukamanja buried what seemed to be the Johannesburg team's winner in the 81st.

But substitute Ruzaigh Gamildien was having none of that, making it 3-3 with a stunning 90th-minute free-kick. In extra-time, another sub, big striker Rhulani Manzini, made it 4-3 to Chippa in the 96th.

Chippa may be fighting relegation in third-last place in the Absa Premiership. But they showed no intent to save their resources for that battle rather than the cup.

Coach Clinton Larsen had a full-strength line-up out, and the battling Eastern Cape team, neatly organised under the former Manning Rangers winger, fought like warriors to trouble Gavin Hunt's second-placed PSL side.

All Wits' famed structure and work ethic could not see them muscle past Chippa in 120 minutes of play, as the men from the Eastern Cape kept rebounding back like a punching doll.

Actually, though, so did Wits.

Chippa left wing Thabo Rakhale created some problems down Wits' right side of defence early to earn a corner. It was taken by Mark Mayambela, dipping short for Mbenyane to deflect a header in off Darren Keet's attempt to parry.

Wits gritted their way back into the game.

Deon Hotto's corner picked out left-back Hlanti free deep in the area, who headed towards goal. Wits' top scorer Motupa swung a leg to touch the ball in past goalkeeper Mbongeni Mzimela.

Larsen had to replace Mbenyane - stretchered off with what seemed a neck injury - with Kurt Lentjies in the 27th.

Another Hotto corner two minutes into injury time picked out the diminutive Dzvukumanja, who powered up to head in Wits' second.

Just past the hour fullback Zita Macheke was played down the right and attempted to cross, striking the arm of Hlanti - who could have removed the limb from the path of the ball.

Referee Eugene Mdluli pointed to the spot, and defensive midfielder Komane stepped up to slot low to the left of Keet.

Once again Wits had to claw their way back into the lead. They did so with a goal of class.

Cole Alexander neatly placed Motupa in down the right of the area, who turned his marker then fed Dzvukumanja ghosting in down the left, the Zimbabwean side-footing his second of the night past Mzimela.

But still Chippa would not lie down. With the last touch of normal time Gamildien curled a gem of a free-kick past Keet to send the game into overtime.

Wits' discipline went to pieces six minutes into extra time. Rakhale played Lerato Manzini into space on the right, who squared across goal behind the desperately lunging legs of the Wits defence for substitute Rhulani Manzini to sweep in at the far post.

Still, neither team would succumb. From Elias Pelembe's cross Hotto smacked a volley past Mzimela to make it 4-4.

In the shootout Gamildien, Komane, Lentjies, and Lerato and Rhulani Manzini all struck home for Chippa, with no misses.