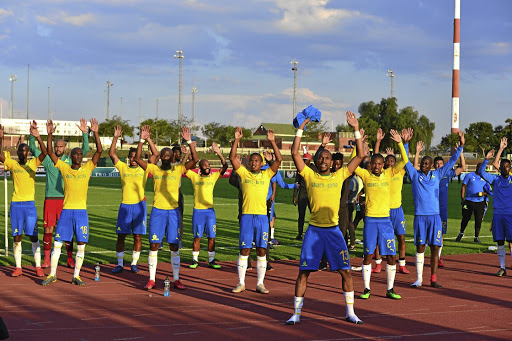 If Downs win their match against Chippa United this afternoon, they will tie with Orlando Pirates at the top.
Image: Gallo images/Philip Maeta

Goalkeeper Kennedy Mweene can breathe a sigh of relief following Mamelodi Sundowns coach Pitso Mosimane's assurance that he is not going to be judged on the error he committed against Baroka.

The Brazilians are firmly in contention for the league title after beating Bakgaga 2-1 at Peter Mokaba Stadium over the weekend.

Downs are second, behind leaders Orlando Pirates and can go level on 50 points if they beat Chippa United at Loftus Stadium this afternoon (3pm).

Sundowns' win in Polokwane saved the Zambian keeper's blushes, with Ricardo Nascimento and Themba Zwane on the scoresheet.

Mweene's kick from the box went straight to Baroka's Bonginkosi Makume, who launched an attack that led to the Limpopo side's goal.

Mosimane, however, has hinted that Mweene may retain the No 1 jersey against the Chilli Boys.

Downs' number one keeper Denis Onyango has not been in the squad for the past two league games. He was sidelined against SuperSport United through injury and though it appeared he was fit for Baroka, Mosimane kept Mweene in goal with Reyaad Pieterse on the bench.

"Denis could have played [against Baroka], but we need him for Africa," he said.

Horror stints at Bucs, Chiefs and Downs
Sport
2 years ago

"But Kennedy must not worry about this one because I've seen Denis do this.

"You have to budget for these sort of things . these mistakes do happen, it's OK."

Meanwhile, influential midfielder Gaston Sirino has also been missing in action because he was suspended for two matches and had a dead leg.

He's expected to be available for the Chippa clash while right-back Thapelo Morena is also set to return to action after missing out against Baroka, because of an injury.

Fourteenth-placed Chippa, who were beaten 4-2 by Kaizer Chiefs in the Nedbank Cup semifinals at the weekend, also have their problems in the goalkeeping department. Some of the goals conceded by Mbongeni Mzimela could have been prevented, especially the first one where he made a hash of Khama Billiat's through ball that was converted by Dumisani Zuma.

"Three of the goals could have been prevented. it was amateurish in my opinion," said coach Clinton Larsen.

"But if we keep fighting like this and giving such performances, I think we will beat the drop."

Chippa will soldier on without their regular wing-backs Zitha Macheke and Tebogo Tlolane.

The players are suspended after receiving a fourth yellow card against Amakhosi.