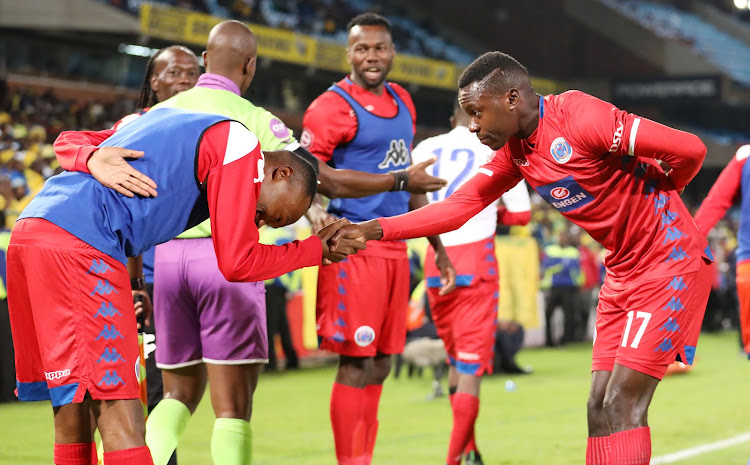 At the end of this lukewarm 2-0 Tshwane derby win for SuperSport United over Mamelodi Sundowns at Loftus on Wednesday, Orlando Pirates coach Milutin Sredojevic must have performed the uppercut punch celebration wherever he watched from.

United’s first league win over Sundowns in the eleventh time of asking has propelled Kaitano Tembo’s team to fourth spot on the Absa Premiership standings with 43 points but most importantly it gave Pirates a significant advantage in the league title run-in.

Pirates have played two matches more than Sundowns but they enjoy a six point advantage which is going to be vital as they seek to win their first league title since 2012.

Sundowns remain third where they are level on 44 points with second-placed Bidvest Wits and coach coach Pitso Mosimane will have to find a way of refreshing the team as they played their 45th match of the season in all competitions so far this season against SuperSport on Wednesday.

Their schedule is not getting any easier as they have catch-up assignments against Baroka FC in Polokwane on Saturday and Chippa United at home on Tuesday afternoon where six points will bring them level with Pirates.

Immediately after the Chippa clash, the Brazilians fly out to Morocco to take on Wydad Casablanca in the semi-final, first leg of the Caf Champions League on Friday where they will also be looking for a favourable result.

Another Pirates’ advantage in the race for the league title is that they would have had a ten-day break by the time they take on Maritzburg United at Harry Gwala Stadium in Pietermaritzburg.

In this game, United took the lead on the half hour mark from when a header by unmarked defender Grant Kekana ricocheted off the upright into the net of Kennedy Mweene after he connected well with the corner kick from of Aubrey Modiba.

After the goal, there was no much action as this game failed to live up to the expectations of a local derby and they went to the break with United enjoying a slender lead.

Sundowns, who looked like their heavy schedule is finally catching up with them, came back from the break with more purpose in their work but they could not find the goal that could have drew them level.

United ensured all the points in the 78th minute when Gamphani Lungu beat Mweene at the near post with a with a low shot as they finally managed to beat their bitter Tshwane rivals for the first time in eleven matches that stretches from 2014.