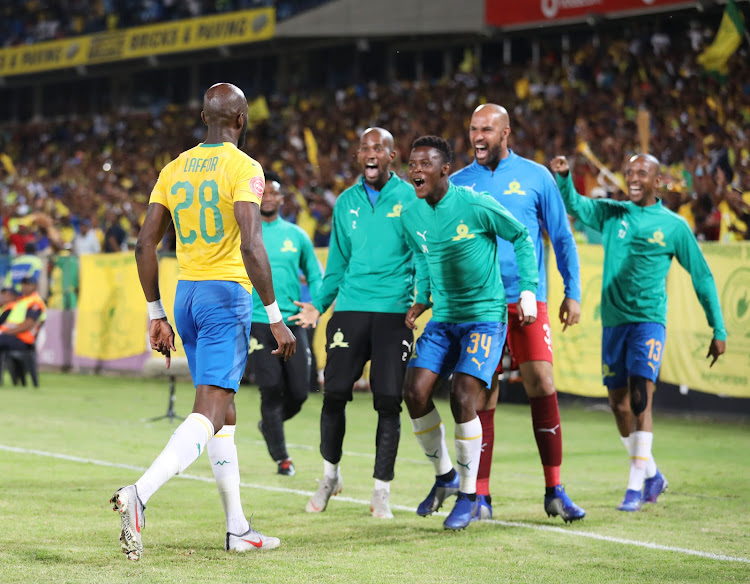 Anthony Laffor of Mamelodi Sundowns celebrates goal with teammates during the Absa Premiership 2018/19 match between Mamelodi Sundowns and Cape Town City at the Loftus Versveld Stadium, Pretoria on the 27 February 2019.
Image: ©Muzi Ntombela/BackpagePix

Mamelodi Sundowns have sent a powerful “catch us if you can” message to the rest of the pack with a comprehensive 3-2 win over Cape Town City at Loftus Versveld Stadium on Wednesday night that has taken them to the top of the Absa Premiership standings.

With this victory, that was secured by goals from man of the match Lebohang Maboe, Anthony Laffor and Phakamani Mahlambi, the defending champions have climbed to the summit for the first time this season where they have been playing catch up due to Caf Champions League commitments.

They went into this match under some pressure and sitting third as a result of two successive draws but they have one more point than second placed Bidvest Wits and three more than third placed Orlando Pirates with a game in hand.

Sundowns coach Pitso Mosimane will be looking for more of the same when they host unpredictable Bloemfontein Celtic at Loftus on Saturday where they have a chance of maintaining their lead at the top.

For City, they remain fourth on the table with 33 points after 21 matches but they are under pressure from SuperSport United who are breathing down their neck on fifth one point less having played the same number of games.

Mosimane made six changes to the team that drew with Wits last weekend with Kennedy Mweene replacing Denis Onyango between the sticks and Rivaldo Cotzee for Wayne Arendse and Langerman for Musa Lebusa in defence.

In the midfield, Mosimane went for Andile Jali for Tiyani Mabunda, Gaston Sirino for Phakamani Mahlambi and Laffor for Lyle Lakay as he freshen things up and his move paid dividends as they looked solid.

The Brazilians opened the scoring after 23 minutes through a well taken half volley from inside the box by Maboe that flew past City goalkeeper Peter Leeuwenburgh for his sixth of the season after he received telling long range pass from Langerman.

City roared back in the game two minutes after the break through a penalty that was taken by Riyaad Norodien after referee Olani Kwinda judged Langerman to have handled the ball inside the box while trying to clear a shot from Siphelele Mthembu.

Sundowns reacted on the hour mark by retaking the lead from a thunderous close range shot by Anthony Laffor after the ball that bounced off a City defender from Zwane’s cross on this path to rifle home past the outstretched arms of Leeuwenburgh.

Sundowns put this match beyond doubt three minutes from time when Mahlambi found the empty net with an easy tap in after he received the ball from unselfish Zwane who laid the ball onto his path after the City defence was caught napping.

Kermit Erasmus scored City’s second goal on the stroke of full time but time was not on their side to rescue a precious point away from home.