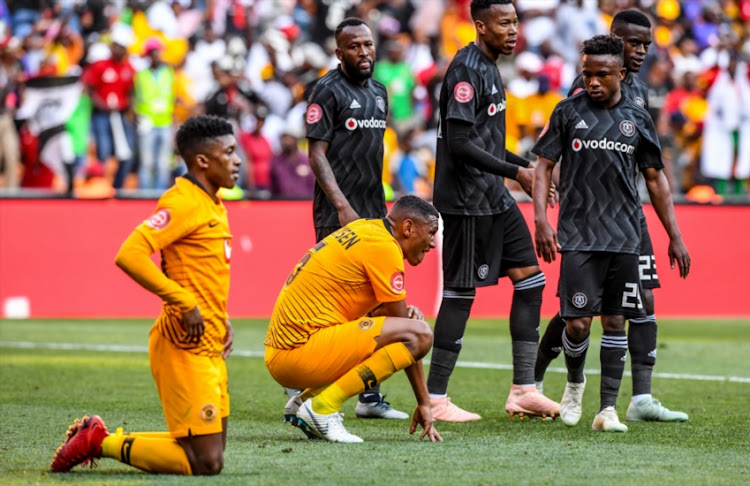 Kaizer Chiefs travel to Port Elizabeth’s Nelson Mandela Bay Stadium to face Chippa United in their Nedbank Cup semifinal on Saturday night (kickoff 8.15pm)‚ but do so against the backdrop of a dismal recent record in last-four clashes.

Since Chiefs last lifted a trophy‚ claiming the league title at the end of the 2014-15 season‚ they have reached six semifinals … and won just two of them‚ and just one of those outright.

Penalty shootouts mean they have advanced to two finals in that time‚ but in most cases stumbled at the semifinal stage as they battle to exert their knockout dominance of years gone by.

Saturday night will be a fourth semi appearance in a row in domestic cup competitions for Chiefs‚ including all three this season‚ but they have yet to push on to make a final in that time.

TimesLIVE looks back at Amakhosi’s tale of‚ mostly‚ woe in semifinal games over the last four years.

Hector Pelembe’s stunner put Celtic in front and they might have added to that advantage before Chiefs leveled through Bernard Parker.

A draw was probably the fair result in the end.

Chiefs finished the job in the home leg as George Lebese scored towards the end of the first half.

They were just about the better side over the two legs‚ but would go on to lose to Ajax Cape Town in the final in Port Elizabeth.

A tense 120 minutes ended with Chiefs claiming the penalty shootout to give coach Steve Komphela his second final in charge of the side – which would end in another defeat‚ this time to Mamelodi Sundowns.

James Keene grabbed the only goal in this contest in which Chiefs were the better team on the day‚ but came up against a resolute Wits defence‚ who had far too much ‘street smarts’ for them.

The match that would spell the premature end to Komphela’s stay at Naturena as fans at Durban’s Moses Mabhida Stadium rioted after the whistle.

Stars were always the better side in this contest.

Chiefs grabbed the lead through Khama Billiat but the game was turned on its head by a first-half brace from their nemesis Bradley Grobler.

Leonardo Castro scored early in the second half to see the game finish all square.

Grobler proved the undoing of Chiefs again with the winning goal after being set up by former Amakhosi star Yeye Letsholonyane.

SuperSport were full value for their win over the two legs.

Orlando Pirates have been dominant over Chiefs in recent seasons and this showed again in the semifinals of the Telkom Knockout in this season.

Thembinkosi Lorch had Bucs in front‚ before Leonardo Castro provided some respite for Chiefs.

Pirates always looked the most likely to grab the winner‚ though‚ and Justin Shonga popped up with the decisive goal.