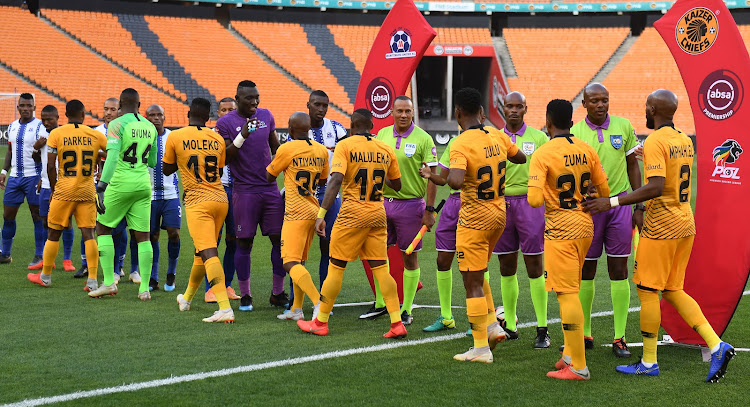 Officials and players during the Absa Premiership match between Kaizer Chiefs and Maritzburg United at FNB Stadium on March 09, 2019 in Johannesburg, South Africa.
Image: Gallo Images

The Absa Premiership clash between Bloemfontein Celtic and Kaizer Chiefs will be played at neutral Peter Mokaba Stadium in Polokwane on April 27‚ SowetanLIVE can reveal‚ suggesting it is unlikely Celtic will feature in Bloemfontein again this season.

Rampaging Celtic fans caused the abandonment of their home league clash with Cape Town City at the Dr Petrus Molemela Stadium on Sunday‚ as they invaded the pitch and fought with police in protest at the protracted sale of the club by owner Max Tshabalala.

Nine fans were arrested amid ugly scenes and Celtic will appear before the Premier Soccer League’s Disciplinary Committee on April 25 to hear their fate in the matter.

It is likely the points will be awarded to City‚ while cash-strapped Celtic could be handed a hefty fine to boot.

With the verdict unlikely to be heard before April 27‚ the PSL have been proactive and moved the game to Polokwane‚ away from the Free State.

Celtic also have a home game against AmaZulu on May 11‚ where they could be pushing for a top-eight spot‚ but there is no word on the venues for that fixture yet.

The PSL are almost certain to demand Celtic play a number of home games in front of empty stands as punishment‚ but that may only come into effect next season unless the DC moves quickly to offer a verdict.

Celtic fans have become disillusioned with Tshabalala‚ who they accuse of stalling on the sale of the club by not providing the documentation for necessary to push through the transaction.

The trouble among supporters has been brewing‚ and is a possible reason why the PSL shifted the venue for this year’s Nedbank Cup final from Bloemfontein to the Moses Mabhida Stadium in Durban.