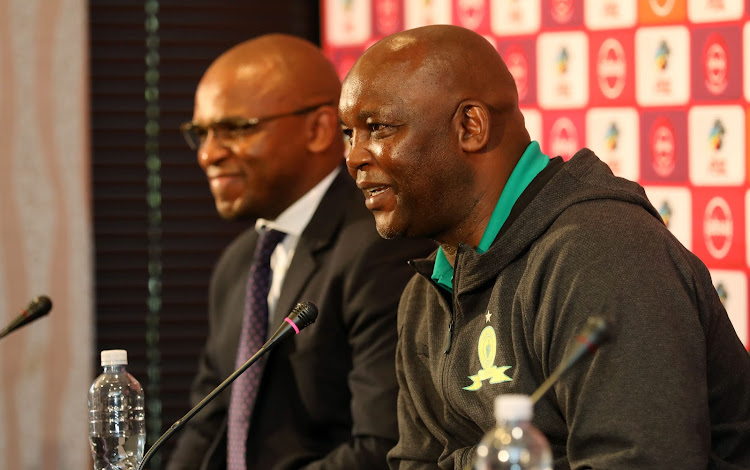 The statement by the league is somewhat confusing‚ though.

It is clearly aimed at Sundowns‚ and seemingly at their coach‚ Pitso Mosimane.

Mosimane again made comments in the post-match press conference complaining about how long the league’s disciplinary committee (DC) is taking to sentence Downs in the Wayne Arendse ineligibility saga.

However the PSL’s statement is in reaction‚ the league said‚ to supposed complaints made about Sundowns’ tough fixture schedule.

This is confusing as Mosimane never blamed the league for his team’s punishing schedule currently‚ where Sundowns have juggled beating Egyptian giants Al Ahly in the Caf Champions League quarterfinals with even more travel for domestic fixtures.

The PSL brought out a five-point statement‚ which did not name Mosimane directly.

It read: “After last night’s Absa Premiership fixture between Mamelodi Sundowns and SuperSport United‚ certain regrettable comments were made.

It’s not often that a visiting coach gets praise from Patrice Motsepe but that is exactly what happened to Kaitano Tembo despite his SuperSport ...
Sport
3 years ago

“The League does not generally comment on matters such as these which must be dealt with responsibly and with the affected persons.

“One aspect that must be clarified relates to the congested fixture list faced by Mamelodi Sundowns.

“The congestion faced is the result of Mamelodi Sundowns' continental success‚ which is to be celebrated. The League has‚ however‚ made every effort to accommodate Mamelodi Sundowns in very difficult circumstances.

“The remaining Mamelodi Sundowns fixtures are on dates and times provided by the club in a proposal of the 25th of March 2019 which is attached and was accepted by the League.”

Mosimane had been asked after the SuperSport defeat if‚ with Downs six points behind leaders Orlando Pirates now‚ with two games in hand‚ the title race remains alive for Sundowns.

“I want to talk on the part of Sundowns. It’s not over. It’s still possible‚” Mosimane responded.

“ … There have been [DC] postponements because we have been out of the country. And the prosecutor [Nande Becker] told me he doesn’t know when we are outside the country.

Political parties are headed for a possible collision course with the Premier Soccer League (PSL) over the use of football stadiums to campaign for ...
Sport
3 years ago

Sundowns have been found guilty‚ but not sentenced‚ for fielding Arendse in a 1-1 draw against Bidvest Wits in October when the defender was not named in the original match-day squad.

Mosimane did talk about Sundowns’ gruelling schedule currently‚ and having to travel to Polokwane on Thursday to meet Baroka FC on Saturday‚ then returning to Loftus to host Chippa United on Tuesday.

He said of it‚ though: “But we put ourselves in this position. So we can’t make excuses of a heavy load.”