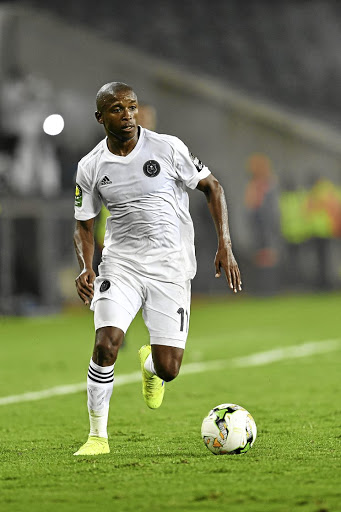 Like a battle-scarred war hero, Orlando Pirates star midfielder Luvuyo Memela has made a return to the team just in time to play a leading role in their CAF Champions League campaign this weekend.

This time last year, Memela was seen as one of the favourites to challenge Percy Tau for PSL Footballer of the Season award.

An injury setback, however, derailed his progress as he was sidelined for six months before his return two weeks ago.

The Cape Town-born attacker made his comeback in the 4-1 win over AmaZulu late last month, where he played a starring role.

Luvuyo Memela has echoed the sentiments of Orlando Pirates teammate Thembinkosi Lorch that the Buccaneers want to win the Absa Premiership this ...
Sport
3 years ago

"It feels good to be back. It's not been easy after being out with injury for a couple of months," Memela said yesterday before their departure to Guinea.

"It was frustrating sitting in the stands and not being able to help the team. I have been getting a lot of support from my teammates and my family ... that has helped me a lot."

The Buccaneers will look to the 31-year-old to boost them in their must-win Champions League clash against Horoya AC in Guinea on Saturday (3pm SA time).

Bucs have made life difficult for themselves in Group B after consecutive draws with Esperance and FC Platinum.

Pirates coach Sredojevic insists they have learnt their lessons

Orlando Pirates coach Milutin Sredojevic lamented his team's lack of counter-pressing as the main reason they were held to a shocking 2-2 draw in ...
Sport
3 years ago

Now the team have to win against the West African team to advance to the quarterfinal stages of the competition.

"I was saying to the guys that it is a blessing in disguise (a must-win situation) because going there for a draw can affect our minds and relax... we can end up being hit on the counter," he said.

"It's better that we are going there to play our normal game. Defending is not our strength, we know that, so going there and wanting to win is a good thing.