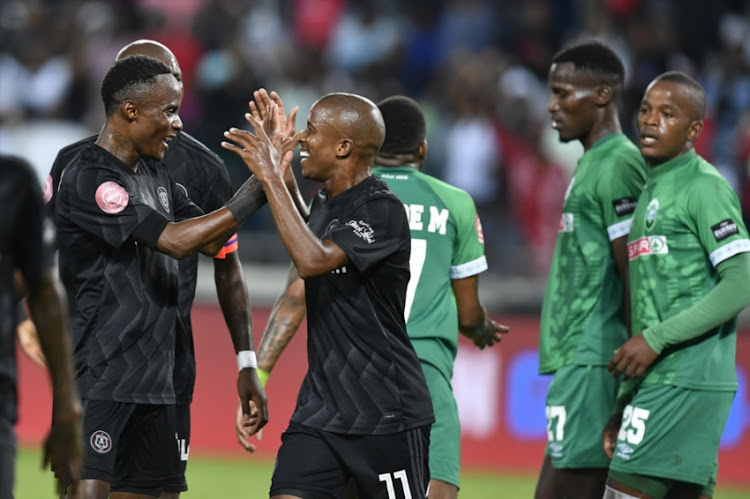 Orlando Pirates returned to winning ways, going above Mamelodi Sundowns into second place in the Premier Soccer League standings as they snapped a run of six successive games without success by walloping AmaZulu 4-1 at the Orlando Stadium on Saturday night.

Pirates came from behind to take the haul of points which puts them on 36, the same number of points as the champions Sundowns who had drawn against Bidvest Wits earlier in the day, putting on a show of incredible running with numerous sprinting attacks.

Pirates, ahead of Sundowns on goals scored, are only two points behind leaders Bidvest -Wits after a scintillating performance of pacy wing play as they cut open the AmaZulu defence with their speed and finished all their goals in almost identical fashion.

Thembinkosi Lorch, again man of the match, was the master architect with strong support from Vincent Pule, Kudakwashe Mahachi, Justin Shonga and Luvuyo Memela, starting his first game of the season after his long injury lay off.

But Pirates, who had lost on Wednesday and had little time to rest in comparison to AmaZulu who have been off for the last fortnight, had to come back after going behind in the 13th minute.

AmaZulu’s goal was made and finished by Jabulani Ncobeni, who stole the ball away in the midfield and then raced half the pitch to get onto the end of a perfect pass from Michael Morton.

But that lead lasted just seven minutes before Mahachi equalised sliding in at the back post to convert Pule’s square pass.

Memela made it 2-1 in the 41st minute after AmaZulu had lost possession and Pirates put together some switch pass before an easy finish.

Two minutes later, Lorch’s square pass from the right set up Shonga in replica of the first two goals.

But the best came late in the game as a series of short passing culminated with Ben Motshwari hitting the ball with fearsome power on the half volley for a perfect finish.