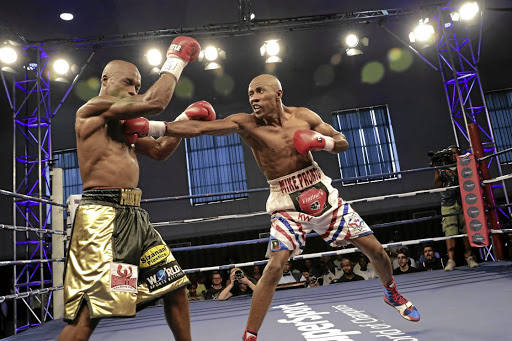 A hard punch to the head of an older boxer disorientates and his legs may give in.

Mokoena's trainer Anton Gilmore revealed this secret yesterday when he was reacting to his charge's win. Interestingly, they caught each other with left hooks on their jaws and both went down in round three.

The crowd went berserk with excitement. Referee Simon Mokadi counted for both of them.

They finally got up and continued with their fight but Mokoena ultimately forced Mokadi to stop the proceedings when he piled pressure on defenceless Mokwana.

Young fighters must not read too much into Walter Dlamini's age and ignore his dedication, level of fitness and current form because they will be in ...
Sport
2 years ago

"If you hit an older guy hard on the skull, their legs give in. I was caught with an overarm right to the head when I was 38 years old and I lost my balance. So I am talking from experience. When Michael connected, the punch disoriented Thompson," Gilmore said.

Gilmore said his charge always gives his all no matter the circumstances.

"He was sick against Tebogo Malose and Marcus Lebogo but he still beat them. It is time for Mokoena to go up now. He has served his internship. Now is the time to climb the ladder," said Gilmore about his charge who floored former world champion Lusanda Komanisi in the fourth round at Emperors Palace in September.

Gilmore is one of SA's unsung heroes who has quietly unearthed and nurtured many fighters.

The fight on Sunday was part of Supreme Promotions' bill.