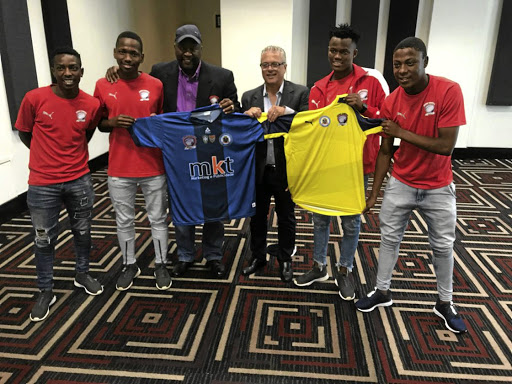 Jomo Sono and Morio Antonio Capuano (president of Gremio Football Club in Brazil) flanked by Cosmos' four under-17 players who have been signed by Capuano. /Mark Ogagan

"It's like a drop of water in the ocean. You don't feel its impact when it comes to Bafana Bafana," said Sono.

Speaking during a press conference in Johannesburg yesterday where Sono announced that four of his under-23 players would leave for Brazil to join Gremio's second team, the Jomo Cosmos owner/coach revealed his frustration over Bafana's struggle to qualify for the Africa Cup of Nations (Afcon).

"Just look at the squad of 1996 which won the Nations Cup, the one that went to the World Cup in France in 1998 as well as that which qualified for the 2002 World Cup in Japan-South Korea - they comprised mainly of overseas-based players," Sono said.

"Right now Bafana faces a daunting task to qualify for the Nations Cup. We need a draw against Libya and nothing is guaranteed and you wonder why. But my opinion is that it is purely because only a few of our players are based overseas."

"Look at Senegal and other African countries which have players abroad, they are doing well," said Sono, who wished Silas Maziya, Onke Moletshe, Zuko Gxabuza and Mpumelelo Zondi well with their move to Brazil.

Sono did wonders during his tenure as Bafana caretaker coach, guiding the national team to the final of the Afcon in Burkina Faso in 1998.

That was considered a remarkable feat.

Jomo Sono has made the stunning claim that it was his tactics as technical director that won Bafana Bafana the 1996 Africa Cup of Nations semifinal.
Sport
2 years ago

"Without sounding arrogant, do not judge me based on Cosmos' results in the NFD, but instead look at what I did and achieved as a player. That is because I left for Portugal at 17 and I was playing for New York Cosmos (in the USA) at 21."

Gremio president Marco Antonio Capuano said: "I am pleased to announce that Jomo has been roped in as our club director of football."