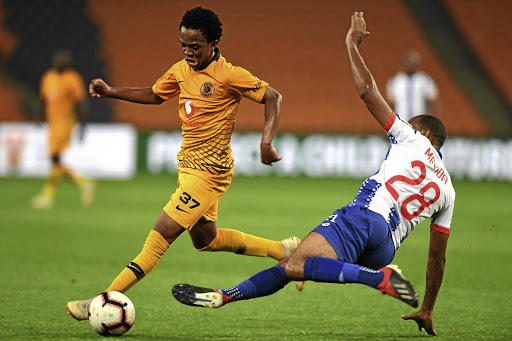 Nkosingiphile Ngcobo of Kaizer Chiefs is the product of Chiefs' academy and was handed his PSL debut on Saturday night when Amakhosi hosted Maritzburg United. Chiefs won 1-0.
Image: Gallo Images

Kaizer Chiefs youngster Nkosingiphile Ngcobo, 19, may have earned recognition through his performance for Amajita, at the Under-20 Africa Cup of Nations the tournament in Niger last month.

But, according to Chiefs coach Ernst Middendorp, Amajita coaches do not deserve credit for Ngcobo's rather meteoric rise, instead it is development mentors at Naturena such as Arthur Zwane who should be lauded.

"It's unfair. simply unfair that people say overnight national team create a new star. Ngcobo had been training with the first team since December,'' said Middendorp after handing him his senior debut in their 1-0 win over Maritzburg United on Saturday.

"It's very important for me to highlight this, not somebody sitting there and has an opinion. Therefore, I think it should be mentioned, the clubs are doing good jobs. It's not the national team, it's not me who prepared these guys [the youngsters] it's the fantastic work at the academy done by people like Arthur Zwane.''

Ngcobo was not the only academy product who got the nod against Maritzburg as prodigy goalkeeper Bruce Bvuma, 23, was preferred ahead of experienced Daniel Akpeyi.

It was Bvuma's second start of the campaign after playing in their 2-2 draw against Bloemfontein Celtic in August.

Middendorp elucidated his decision to drop Akpeyi for Bvuma, revealing they were preparing the latter for their Nedbank Cup quarterfinal clash against high-riding Cape Town City at Mpumalanga's Mbombela Stadium on March 31. The Nigerian-born Akpeyi is cup-tied.

"We have a very, very important game on the 31st of March. We have to be well-prepared to win this game. Bruce is a goalkeeper, Daniel cannot play because he's cup-tied. of course you have to manage that situation," Middendorp said.

"This change has nothing to do with what Daniel did in the last game [3-2 win over Highlands Park last week]. We are happy with his performance. He's a national team keeper. he will be in Afcon.''