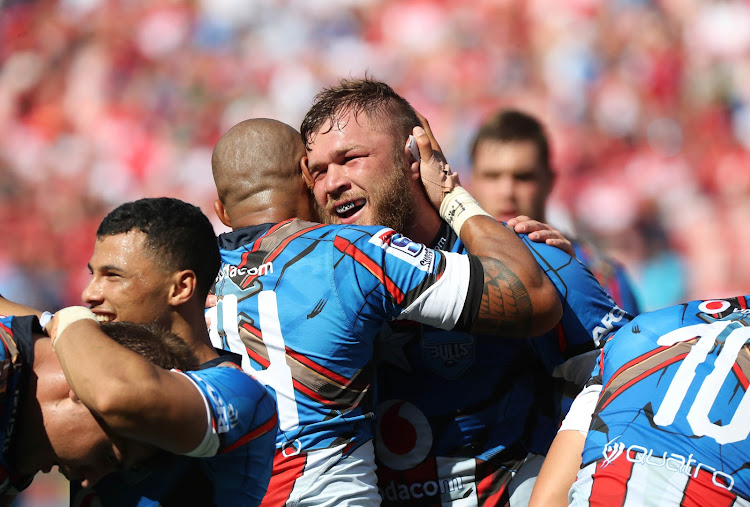 Duane Vermeulen of the Bulls (r) celebrates try with teammate Cornal Hendricks during the 2019 Super Rugby match between the Lions and the Bulls at Ellis Park Stadium, Johannesburg on 02 March 2019.
Image: ©Gavin Barker/BackpagePix

The Bulls applied equal amounts of brawn and brain as they vanquished the Lions 30-12 on home soil on Saturday.

They simply outmuscled the Lions up front and had their uncharacteristically lethargic hosts firmly pinned on the back foot for the bulk of the opening hour.

Perhaps more brutal was the manner in which Handre Pollard delivered punishing kicks to the Lions’ guts from the kicking tee.

He was merciless in delivering a conversion and six penalties from the kicking tee.

The defeat, as well as the manner in which it was administered, must now signal the end of the domination the Lions had enjoyed in the South African conference the last three years.

The Lions had gone 21 matches unbeaten in conference play before the Sharks beat them in Durban last year.

Defeat against the Stormers last week more than raised the suspicion that the Lions mantle of local standards are under serious threat.

As the Lions are back pedalling, the Bulls are snorting with intent. The Lions without the leadership of Warren Whiteley were bossed in the collisions and it was particularly in the backrow where the Bulls made their size advantage count.

The Bulls was the more incisive team in the first 20 minutes and the Lions were forced to absorb pressure.

The Bulls held a distinct advantage in the territory stakes and that the Lions conceded just three points inside the opening 20 minutes speaks volumes for their ability to roll with the punches.

The Bulls however will reflect on that period as one in which they could have been more clinical.

They conceded a crucial ruck turnover penalty on the Lions’ goalline in the seventh minute and the Lions found relief on two other occasions with their backs to the wall in the first quarter.

The Bulls however persisted. They made the hard, valuable yards in the tight exchanges with Lizo Gqoboka, Hanro Liebenberg and Duane Vermeulen bashing away at the Lions’ defence.

It also helped that their line-out, in which they were yet to concede a throw in Super Rugby coming into this match, again functioned to near optimum levels.

They also bossed the breakdowns where the Lions, despite the fact that they had two dedicated ball poachers, often found themselves on the wrong side of the law.

Scrumhalf Embrose Papier exercised sound judgement from behind the marauding pack. Not just that, when the visitors showed cracks, he was particularly proficient at papering it over as a last line of cover.

Outside him Pollard delivered another assured performance.

By the time Lions tighthead prop Carlu Sadie knocked on from a routine pass it perhaps perfectly encapsulated the hosts’ first half effort.

The Lions battled bravely in the second half particularly through Marnus Schoeman. The flank, who wears the look of a weary pugilist was industrious, although not always advancing the Lions’ cause.