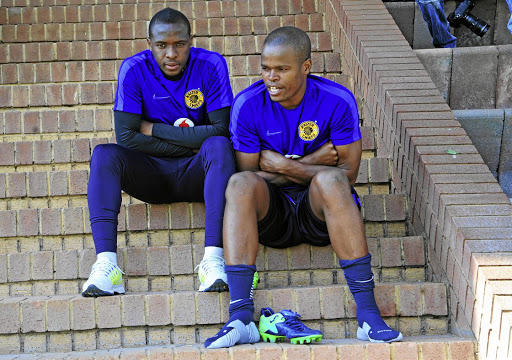 Maluleka, 30, has found a new lease on life since Middendorp arrived early in December and has even captained the Phefeni Glamour Boys at times.

Katsande, 33, was dropped for the last three games - the Soweto Derby against Orlando Pirates, which ended 1-1, the 3-0 win over the Magic in the Nedbank Cup last 16, and didn't even make the team again for the 1-1 draw against Polokwane City over the weekend.

Nkosi had two spells at Chiefs and is now a TV football analyst. He's been keeping an eye on the latest developments, specifically in Chiefs' midfield.

Out of depth: The 'CB' without 'D' not working at Kaizer Chiefs

"It's common everywhere in football that a coach prefers certain type of players in certain positions. I knew that as a player and Katsande knows that," Nkosi told the Sowetan.

Nkosi is one of the former players that are very familiar with Middendorp. Not only did they work together at Chiefs but also at German club Arminia Bielefeld.

"Katsande will offer you bite in midfield. He'll offer you aggression and he won't offer much in terms of penetrative play, because his passing is not so great," explained Nkosi.

"George, on the other hand, is capable of advancing you much quicker than Katsande. George can also offer you aggression and I think he's gotten better in terms of defending.

"Knowing Ernst, he likes a player who can connect from that [defensive midfield] position and the forwards.

"So it's no surprise that he prefers George," Nkosi added.

"Mido" has started 94 matches and came on as a substitute 31 times for a total of 125 appearances.

During this period, he's scored 10 goals to go with his 16 assists.

The Zimbabwean strongman has started 159 matches and came on as a substitute in just two games [for a total of 161 appearances].

Chiefs out to redeem themselves