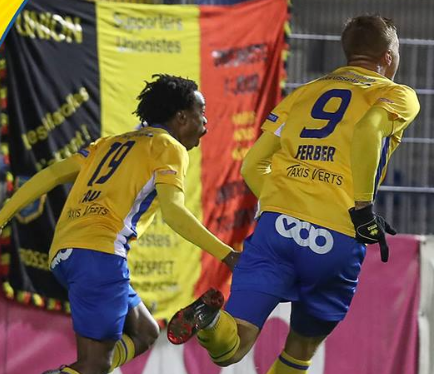 Percy Tau had to settle for an away draw while Lebo Mothiba drew a blank against Paris St Germain as both Bafana Bafana stars featured in crucial cup action on Wednesday night.

Mothiba started in the French FA Cup against the Parisian giants‚ who started with Neymar and Edinson Cavani‚ and were fresh from their 9-0 hammering of Lebogang Phiri’s Guingamp at the weekend.

Up against experienced Brazilian defenders Thiago Silva and Dani Alves‚ Mothiba‚ who is just back from injury‚ was replaced after 66 minutes as PSG won 2-0 to advance to the next round.

Mothiba could still taste knockout success this season though as his side line up in a League Cup semifinal against Bordeaux next Wednesday.

Phiri’s Guingamp are still in that competition as well and host struggling Monaco.

Tau had two goals controversially ruled out as he started for Royal Union St Gilloise as they earned 0-0 draw away at more fancied Mechelen in the first leg of their Belgian Cup semifinal.

Tau twice had the ball in the back of the net but was flagged for offside‚ with replays showing the calls were marginal at best.

What was more galling for Union fans is the fact that the Video Assistant Referee was available to be used by the match officials‚ but was not used.

Union have now played to two draws and two defeats to fellow second-tier side Mechelen this season‚ but in all games have felt on the wrong side of the match officials.

Even going into this match‚ fans had brought a banner that read ‘KBVB Mechelen’‚ with KBVB the Dutch abbreviation for the Royal Belgian Football Association.

It would be the equivalent of rival fans creating a banner to read ‘Safa Kaizer Chiefs’‚ suggesting support from the governing body for the club.

“The VAR was there to intervene if needed‚ so we have to assume that everything was right‚" a rueful Union coach.

They will host the return on Tuesday and with a place in the May 1 final up for grabs.

Highlands Park turned down an offer for R10-million from a rival club to buy their star forward Mothobi Mvala‚ Park coach Owen Da Gama has revealed.
Sport
3 years ago

Baroka settled for a draw as Pirates found an equaliser to finish 1-1.
Sport
3 years ago
Next Article