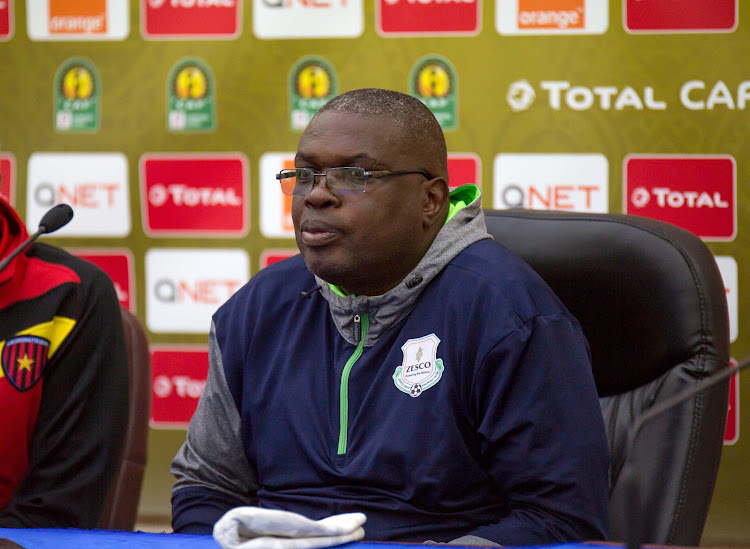 In a humorous‚ but also perhaps not-so veiled‚ hint that was on a par with Cuba Gooding Jr’s character’s “show me the money” line in Jerry Maguire‚ Zesco United coach George Lwandamina has said he would welcome a job in the Premier Soccer League (PSL).

Lwandamina‚ the big‚ 55-year-old 1980s Zambia international‚ was the architect of Zesco’s run to the 2016 Caf Champions League semifinals‚ where they lost against tournament winners Mamelodi Sundowns.

This past fortnight – having left Zesco in November 2017‚ and returned in April last year – has now also been the architect of Kaizer Chiefs’ exit from the Caf Confederation Cup‚ with a 5-2 aggregate victory completed by Saturday night’s 2-1 away leg win at FNB Stadium.

The big man nicknamed “Chicken” has impressed with the sharpness and tactical astuteness of Zesco in his two stints in the past four years.

He was asked if – like another former Zambia international and national coach‚ Wedson Nyirenda‚ at Baroka FC – he might consider a job in the PSL.

“Ja‚ there are jobs here. If it [were offered] I would take it up‚” Lwandamina responded.

“Who doesn’t acknowledge the fact that money would attract anyone‚ including yourself [the questioner].”

Lwandamina explained Zesco’s counterattacking strategy – absorbing as Chiefs pressed for the two goals they needed to reduce a 3-1 deficit from the first leg‚ and hitting on the break – that was so effective against Amakhosi in the second leg.

“We knew that our friends have experienced and very fast players. So we just divided the team into two units – six to do the defensive one‚ the other four to do the attack‚” the coach said.

“We knew they would leave spaces behind because they wanted this game so much. And they did. And the chances that we created we were able to put away.”

Lwandimana‚ a mountain of an affable man who sports a sly grin with much relish‚ displayed his wit and sense of humour at the post-match press conference to his team’s second-leg win against Chiefs.

He was asked about his targets for the remainder of Confed‚ where Zesco are into the group stage and drawn in Group C with Sudan’s Al-Hilal‚ Asante Kotoko of Ghana and fellow Zambian club Nkana FC.

“Those are mine‚ and I will keep them‚” he said‚ grin readily available.

Zesco’s win against Chiefs is more impressive given they are still in their preseason and have only kicked a ball in competitive matches in the Confed for the past three months. Zambia’s Super League kicks off on January 27.

It might come as a surprise to some that there’s a soccer player in Guinea who uses the Mandela family name and Horoya AC captain Mandela Ocansey has ...
Sport
3 years ago

South African soccer legend Philemon Masinga will be laid to rest in a provincial official funeral in Klerksdorp in the North West on Thursday.
Sport
3 years ago
Next Article