The Jomo Cosmos‚ Mamelodi Sundowns‚ Leeds United‚ St Gallen and Bari striker whose thunderous long-range goal at FNB Stadium in 1997 had sent South Africa to its first World Cup - France 1998 - was to be laid to rest in the township of Khuma‚ where he grew up.

Masinga‚ the tall‚ lean‚ awkward centre-forward who scored goals in South Africa‚ England‚ Switzerland and Italy‚ died of cancer last Sunday in a Johannesburg hospital. He was 49.

A group of supporters led by Saddam Maake travelled by bus from Joburg from midnight to be at Phil Masinga's funeral at Khuma Stadium in his home town, Stilfontein, North West this morning@SAFA_net @BafanaBafana @LUFC @Club_barifc @Jomo_CosmosFC @Masandawana @OfficialPSL pic.twitter.com/qcE6Elmqhf

The funeral procession‚ led by the hearse carrying the coffin draped in a South African flag‚ left from a outside marquee erected in the street in front of the Masinga family home in Khuma‚ where onlookers had gathered even as early as 6am.

One of Masinga's two daughters‚ Tenyiko‚ was carrying a golden boot award the big striker had won in an SA domestic competition. 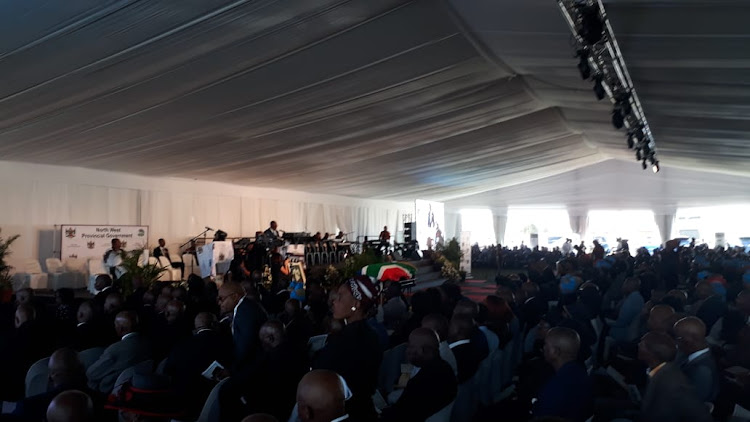 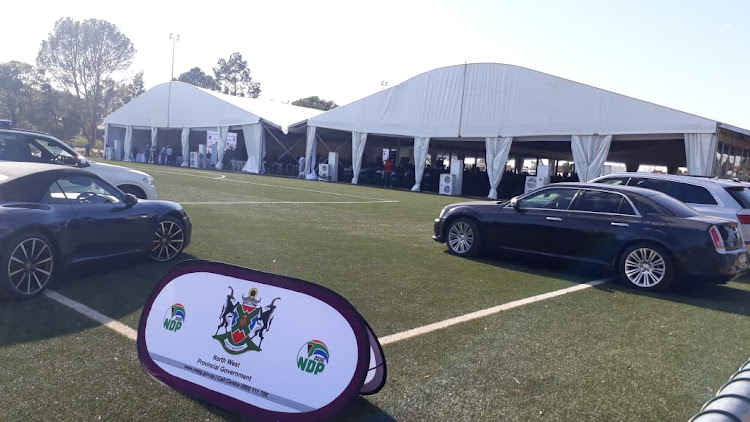 Khuma‚ outside Stilfontein - a small mining town‚ population 18‚000 between Potchefstroom and Klerksdorp - had come to a standstill to lay to rest its greatest hero.

Two huge marquees‚ with seating for perhaps 1‚000 people‚ on the Khuma Stadium field were slowly filling.

While Masinga never played for Chiefs‚ Maake was present at some of the big striker's best matches for Cosmos and Sundowns against Amakhosi‚ and his Bafana games‚ including when South Africa won the 1996 Africa Cup of Nations on home soil.

The club matches included a classic 4-3 BP Top 8 final win for Cosmos over Chiefs in 1991 at FNB Stadium where Masinga scored a hat-trick.

"I was there that day when even the media confused it and didn't know who should get the man-of-the-match‚" Maake said‚ in reference to the awarding of man-of-the-match in that final to Chiefs striker Fani Madida‚ which was reversed and presented to Masinga a few days later.

"I was there in 1996. Masinga took us to the World Cup. What I didn't like was when South Africa fans booed Masinga. The way he came back from that was marvelous."

Not surprisingly‚ Bloemfontein Celtic's famous supporter‚ Botha Msila‚ an everpresent at Premier Soccer League matches of all clubs‚ and Bafana games‚ had made his way to Stilfontein.