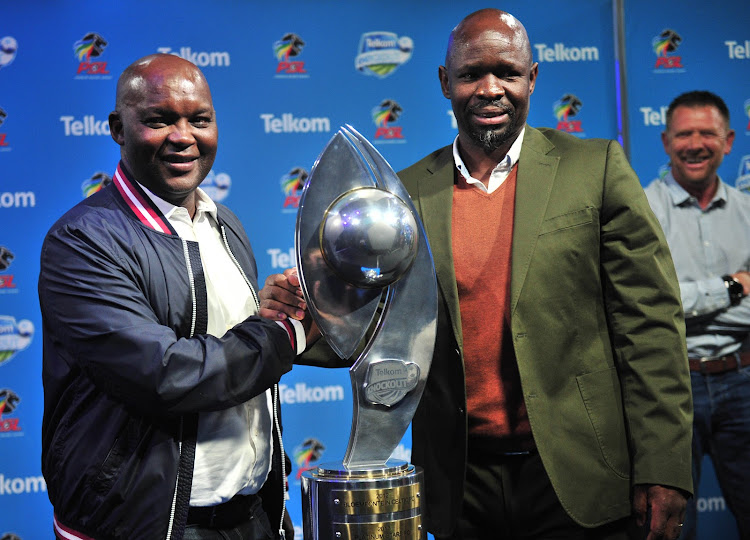 Pitso Mosimane has lavished praise on his counterpart and friend Steve Komphela ahead of the two coaches’ Telkom Knockout matchup in Pretoria next week.

Mamelodi Sundowns were drawn at home to last season’s TKO losing finalists Bloemfontein Celtic in the first round of the R4m prize tournament.

The date and venue for this mouthwatering fixture is yet to be known but it will be either Saturday‚ October 20 or Sunday‚ October 21 in the nations’ capital.

Sundowns failed to breach the Celtic rearguard after a goalless league match on October 3 in Bloemfontein that left coach Mosimane furious over a disallowed goal that should have stood.

The two coaches will face off again in the TKO and Mosimane said he is wary of a revived Celtic under Komphela.

“Coach Steve is showing that he has been good all the time irrespective of what happened at Kaizer Chiefs‚” said Mosimane.

Komphela oversaw Chiefs’ longest ever trophy drought after failing to deliver silverware in the almost three seasons he spent at Naturena.

He was a constant subject of ridicule from Chiefs’ supporters from the day he was appointed until his resignation in April after a Nedbank Cup semifinal defeat to Free State Stars in Durban.

Komphela joined Celtic at the beginning of the season and has guided the club to a bright start with four wins‚ two draws and two defeats in their opening eight matches.

Mosimane said that even with a tiny budget compounded by Celtic’s well documented financial problems‚ Komphela has demonstrated his qualities and capabilities as a coach.

“Komphela is still showing with a team not as big and Kaizer Chiefs and he is still on top and he has done very well. I mean we couldn’t even beat them last week‚” Mosimane said.

“Also to play a team that nearly won it last year and it’s a revived team‚” said Mosimane.

Celtic lost out to Bidvest Wits in last season’s final in KwaMashu and will be determined to have a good run in the cup they lifted in 2012.

Mosimane's side has had a typically slow start to their season having amassed just 11 points from a possible 21‚ while also crashing out of the MTN8 and the Caf Champions League in the past two months.

But Mosimane is positive that his team will lift some piece of silverware this season.

“It has been a norm at Sundowns since we’ve been here that every year the team must win a cup. So hopefully it is this one.”