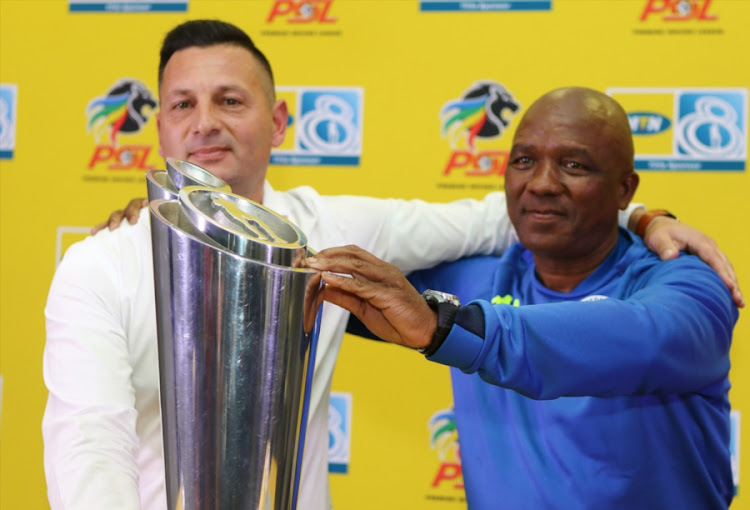 Cape Town City assistant coach Vasili Manousakis (L) pose for photographs with the MTN8 trophy with his SuperSport United counterpart Godfrey Mosoetsa ahead of the final at the Moses Mabhida Stadium in Durban on Saturday September 29 2018.
Image: Anesh Debiky

SuperSport United will seek to become just the third club in South African football history to retain the top eight title when they meet Cape Town City in the 2018 final at Moses Mabhida Stadium in Durban on Saturday.

SuperSport lifted the trophy against the same opposition‚ at the same venue‚ last year and are seeking a repeat performance in what is their 10th cup final appearance in the last six years.

Only Kaizer Chiefs and Orlando Pirates have ever managed to retain the top eight title in consecutive years‚ with SuperSport hoping now to become the third team to do so.

Chiefs thumped Dynamos 7-1 on aggregate in their two-legged final in 1981 and then followed that up with a 7-2 aggregate victory over Moroka Swallows the following year.

They edged Jomo Cosmos 4-3 in a thriller in 1991‚ a game in which Phil Masinga scored a hat-trick for Ezenkosi and still ended up on the losing side‚ while Chiefs then beat Mamelodi Sundowns the following year.

Pirates’ double success started with a penalty shootout victory over Swallows in 2010‚ which was followed by a 1-0 success over Chiefs the following year as Oupa Manyisa scored an injury-time winner.

SuperSport appeared in three finals in a row under coach Pitso Mosimane between 2004 and 2006‚ but won only the first. They were also on the losing side in 2012‚ meaning they have claimed victory in just two of their five previous final appearances.

Gift Links is ready to explode against SuperSport United in the MTN8 final.
Sport
3 years ago

Cape Town City’s goal hero Ayanda Patosi says he is not 100 percent certain of success in this Saturday’s MTN 8 final but rather “150 percent” sure ...
Sport
3 years ago
Next Article