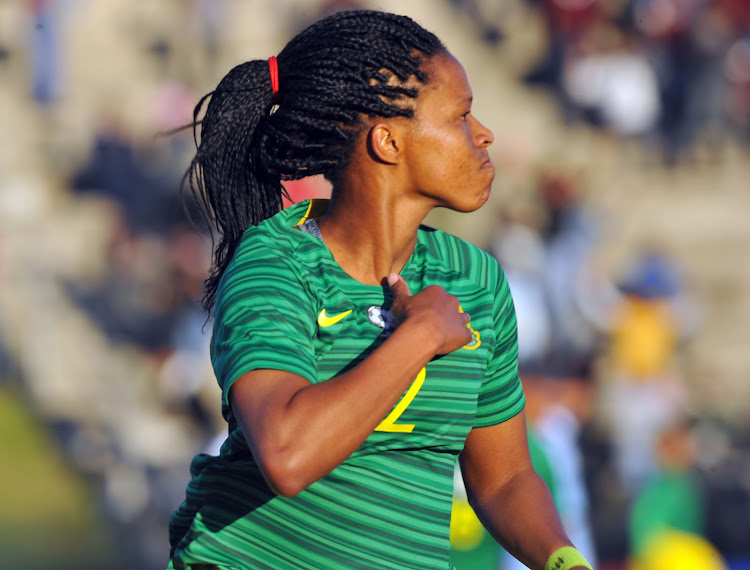 Jermaine Seoposenwe scored in the dying seconds as a wasteful Banyana Banyana defeated Botswana 1-0 in a ferocious wind in their 2018 Cosafa Women’s Championship Group A clash at the Wolfson Stadium in Nelson Mandela Bay on Friday.

Seoposenwe headed home at the back post with the last play of the game to send the sizeable crowd into rapture and spare the blushes of a home side who had battled to break down their opponents.

It will be relief all round for Banyana after Nompumelelo Nyandeni had missed a penalty in the second half as the side were thwarted by a brilliant display from Botswana goalkeeper Maitumelo Bosija‚ who ironically plays for Bloemfontein Celtic Ladies in South Africa.

It leaves Banyana’s semifinal hopes on track with a full haul of six points from their two games‚ and they are likely to just need a draw in their final pool game against Malawi on Monday to advance.

Botswana will fancy their chances of beating Madagascar in their final group game and could still qualify as the best runners-up after a gutsy performance.

Playing into the wind in the first half‚ Banyana failed to create much in the way of chances as they battled with their weight of passes.

But in the second period they dominated their opponents‚ pinning them back in their half as they created a number of excellent chances.

The best fell to Nyandeni‚ whose penalty after a Botswana handball was pushed onto the crossbar by Bosija‚ who then got up to pull off a near-miraculous save from the rebound when the ball crashed into her face and she was able to hold onto it.

Just seconds before the penalty incident Nyandeni had crashed the ball against the Botswana post with a thunderous drive from the edge of the box.

Full-back Nothando Vilakazi also forced a good stop from Bosija as she shot from distance‚ before Refiloe Jane forced another smart save from the Bloemfontein Celtic Ladies keeper.

Botswana almost stole it at the death when Nondi Mahlasela’s long-range shot drifted just wide of Kaylin Swart’s goal‚ but in the end it was the home side who proved victorious.

A deep cross was played into the box and as Bosija hesitated‚ and Seoposenwe rose to head home an excellent winner for the side.

Banyana Banyana coach Desiree Ellis is expecting another tough run-out when her side take on Botswana in Friday’s crucial 2018 COSAFA Women’s ...
Sport
3 years ago

South Africa survived some nervous moments but got their 2018 COSAFA Women’s Championship campaign off to a winning start with a 2-1 success over ...
Sport
3 years ago
Next Article