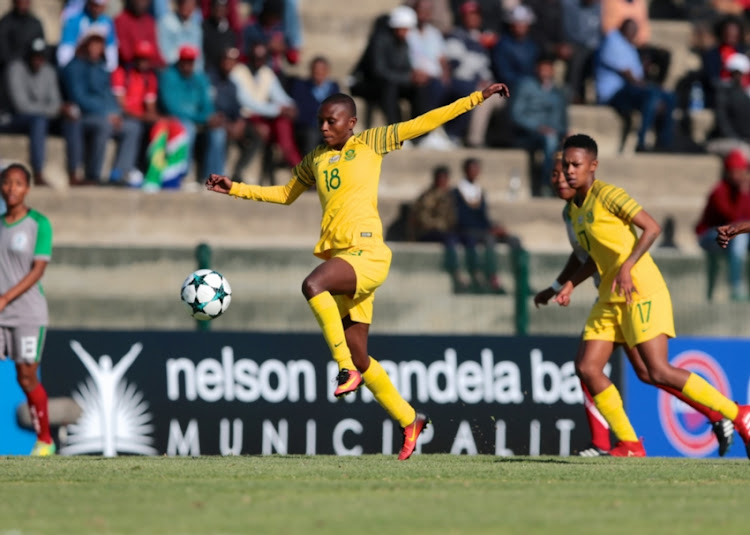 South Africa survived some nervous moments but got their 2018 COSAFA Women’s Championship campaign off to a winning start with a 2-1 success over Madagascar at the Wolfson Stadium in Port Elizabeth on Wednesday afternoon.

After racing into a two-goal lead thanks to strikes from Khanya Xesi and Nothando Vilakazi‚ Banyana Banyana were forced to hang on at the end with 10 players after Thato Letsoso was sent-off on her debut.

It’s not the kind of performance coach Desiree Ellis would have been hoping for‚ but the three points gets the team off to a positive start in a tournament where only the top team in each pool‚ as well as the best-placed runner-up‚ advance to the semi-finals.

And with the Houston Dash trio of Janine van Wyk‚ Thembi Kgatlana and Linda Motlhalo arriving at the tournament on Wednesday‚ Banyana will be reinforced for their next fixture against Botswana on Friday.

Ellis was dealt a blow prior to the match when striker Chantelle Esau was ruled out of the tournament with a knee injury sustained in training.

But they made the perfect start against Madagascar as Khanya Xesi grabbed the first goal inside seven minutes to calm home nerves.

It was 2-0 on 19 minutes as Nothando Vilakazi doubled the advantage and at that stage it appeared as though Banyana were cruising to the win.

But the game changed two minutes later when the Malagasy were handed a penalty and Sarah Rasoanandrasana. Madagascar pushed forward in search of the equaliser and came close when a free-kick struck the post.

Banyana had to hang on at the end as Letsoso received a second booking to reduce the side to 10 players for the final 20 minutes.

Also in Group A on Wednesday‚ Botswana defeated Malawi 2-0 to top the pool‚ while in Group C East African guest nation Uganda defeated Eswatini 4-3 in a seven-goal thriller.