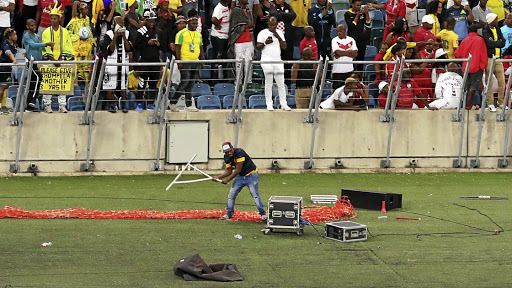 A fan vandalises broadcasters' equipment during a match between Kaizer Chiefs and Free State Stars at Moses Mabhida Stadium in Durban in April.
Image: Muzi Ntombela/BackpagePix

As Kaizer Chiefs study the Premier Soccer League's ruling that stated they play two matches behind closed doors following a crowd riot in April, Sowetan understands the club will fight the decision.

Chiefs were ordered to play two games behind closed doors after their fans trashed Moses Mabhida Stadium in April in the wake of their defeat to Free State Stars in the Nedbank Cup semifinal, forcing Steve Komphela to resign as head coach.

Surprisingly, the PSL ruled that the ban should be applicable only to Amakhosi's games set to take place in Durban.

Such a ruling will hit the club hard in the pocket given that they would have to pay for flights and accommodation, only to play in front of empty seats.

But Sowetan has established the club will prepare an appeal. "An appeal in this case is inevitable. First of all, this was a cup match. So why punish a different sponsor (Absa) who must have their game in an empty stadium?

"Also clubs are not responsible for organising security in cup games. It's the league's responsibility" said an official familiar with the case.

Should the appeal not go Chiefs' way, the team would have to play their next match scheduled for Durban - against Polokwane City next month - behind closed doors.

Chiefs has established a relationship with the eThekwini Municipality over recent years as the Soweto club is said to be financially incentivised for hosting some of their games in KZN.

Last season the club took six of its games to the stadium.

If the penalty stands, the club will suffer losses from the earnings from ticket sales.

But the PSL maintained it wanted to punish the club's fans in KZN.

"The disciplinary committee further ruled that the matches which the club play behind closed doors must be scheduled for KZN.

"The DC held a view that since the incident had occurred in KZN, a strong message must be sent to the spectators in that province that the behaviour of 21 April 2018 is totally unacceptable."

Orlando Pirates suffered a one-game fan ban in April for a nasty incident from 2017 when Bucs fans destroyed property at Loftus Versfeld during their 0-6 hammering against Mamelodi Sundowns.

Pirates were ordered to play their match against Bidvest Wits at Orlando behind closed doors, but it was still televised.